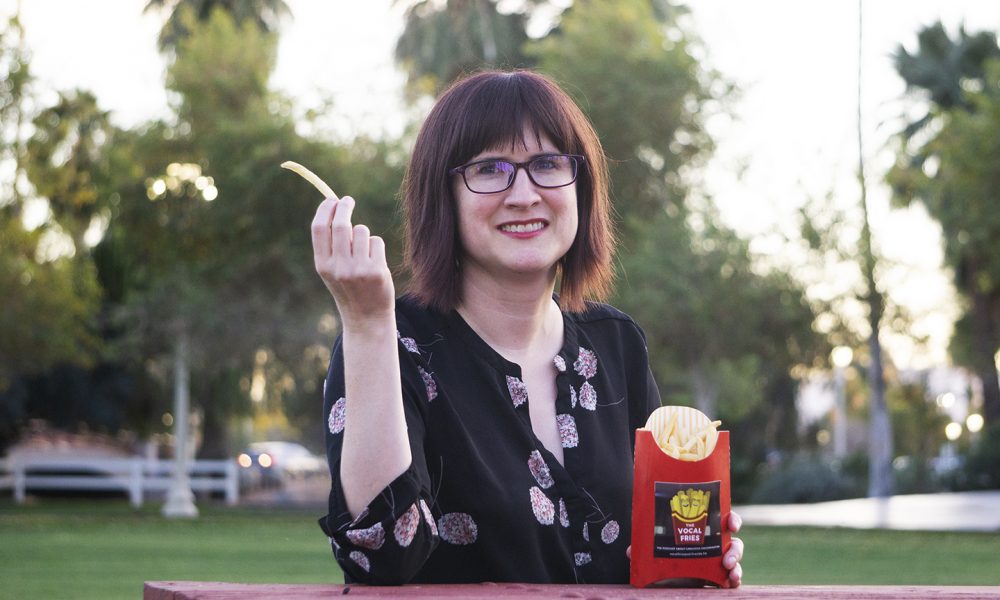 Today we’d like to introduce you to Carrie Gillon.

Carrie, please share your story with us. How did you get to where you are today?
I was a professor of linguistics who left academia. (Linguistics is the study of language – and, for many linguists, including me, the scientific study of language.) I wanted to continue to share my love of linguistics and language now that I was no longer sharing it in the classroom. Just before I left academia, I had been asked to give a TEDx talk about language, and I chose to talk about linguistic discrimination. Linguistic discrimination is the way that we judge others for the way that they speak.

Or, as the Vocal Fries say, it’s the sneaky way to be racist, sexist, classist, etc. It’s somehow still semi-socially acceptable to judge other people’s speech or writing, but it shouldn’t be. In the TEDx talk, I wanted to show how, if you don’t want to be racist or classist or ableist, you can’t also be mocking typos or non-standard ways of writing/speaking. If you think xenophobia isn’t cool, you shouldn’t be mocking non-English languages. If you don’t want to be sexist, you shouldn’t be mocking women for speaking a certain way. And so on. Later, I realized this would make an excellent topic for a podcast – I love podcasts, and listen to many – and that I would be able to reach even more people than I ever had as a professor. So I asked a former student and current friend, Megan Figueroa to be my cohost. She agreed.

My husband, Chris Ayers, originally edited and produced the show (now I do that), and created our amazing logo, using Red Robin fries as his inspiration. We’ve been podcasting for over two and a half years now, covering topics like vocal fry (naturally); the rhetoric of xenophobia with Ben Zimmer; “foreign” accents, why judging them is harmful, and how we can get better at understanding people who speak with a different accent than ours; and acting and singing with Duane Daniels.

Our target audience is people who already want to be a better person, who don’t want to be racist, sexist, etc. We are also learning and growing as we podcast, and we admit when we have made mistakes in the past or on the show. We know that no one is perfect and that we all make mistakes – it’s just what you do once you know that. Our tag line is “Don’t Be An Asshole!” because we want to remind ourselves and others that language policing is not good, despite everything we’ve been taught in school, by our parents, or by society at large.

We’re always looking for new topics and guests, so please let us know if you want us to cover anything or know of a good potential guest!

Great, so let’s dig a little deeper into the story – has it been an easy path overall and if not, what were the challenges you’ve had to overcome?
We had to learn how to provide information in a fun and engaging way – someone unlike what you’re expected to do in a university setting. We had to learn how to explain complicated jargon (even vocal fry, which is not the jargon linguists use, was difficult to explain using audio only). Over time, I think we’ve gotten better at this, focusing more on the socio-cultural aspects rather than the technical details. (Details that I still love!)

We had to learn how to interview people. While I had plenty of experience working with consultants, eliciting language data, I had not done this kind of interviewing before. Both of us were nervous about this, but it is so fun asking people about their passions and/or languages that the nerves melt away pretty quickly. Learning how to edit audio was probably the most difficult task. Luckily, Chris had learned a lot and taught me, but it was by far my least favorite part. I’ve since learned to enjoy it because I have more control over the final product. We still struggle with self-promotion, but hopefully, with time we will get better at that too.

Please tell us about The Vocal Fries Podcast. What should we know?
The Vocal Fries specialize in all things to do with judging language. We are probably the most famous for fighting against judging vocal fry. Vocal fry is a way of producing speech sounds that sounds creaky. (Creak/creaky voice is what linguists call it, rather than vocal fry.) People tend to associate it with young, white women. But it turns out that men use vocal fry nearly as much, and that they used it first.

British men have used it since at least the 1930s, and it was associated with upper crust-ness. No one (besides linguists, speech therapists and singers) noticed or cared about vocal fry until women started using it. (And it isn’t just white women who use it; Lizzo and Beyoncé also use it quite a bit.) We talk about vocal fry semi-regularly, so people tag us into conversations about it on Twitter. But we also discuss other forms of linguistic discrimination.

There are many other linguistics podcasts out there, but only one or two others discuss linguistic discrimination and ours is the only one that comes at it from more fun, less straight reporting angle. I’m proud that we’re known for fighting the good fight, and that our episodes are regularly used in linguistics classrooms/syllabi.

Is there a characteristic or quality that you feel is essential to success?
We know our stuff and we take on new information as it comes. We also try to ensure nothing we talk about or no one we interview is actively harmful. We try to practice what we preach: we try not to be assholes (particularly about language). I think being silly and joking around helps too. 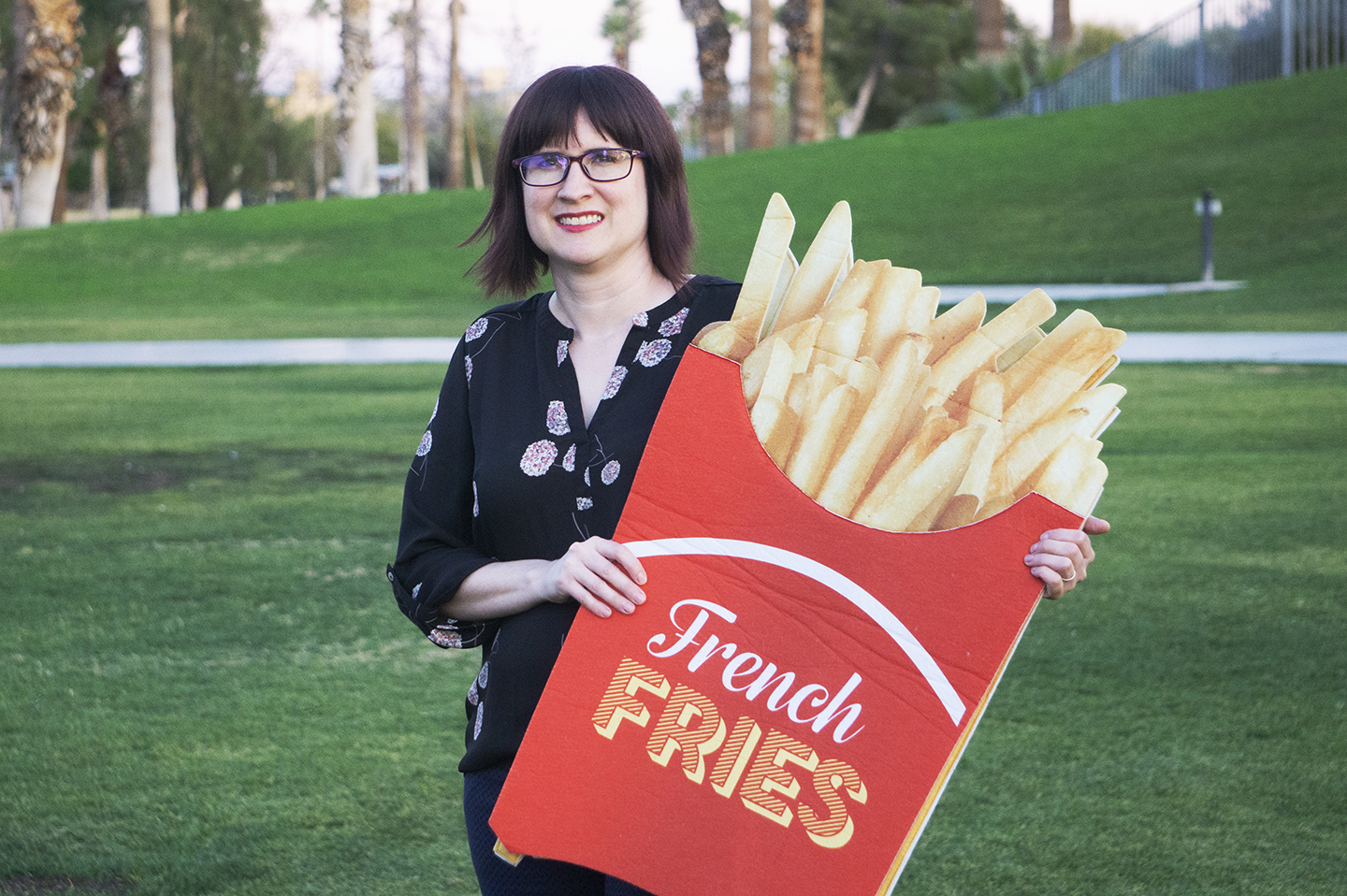 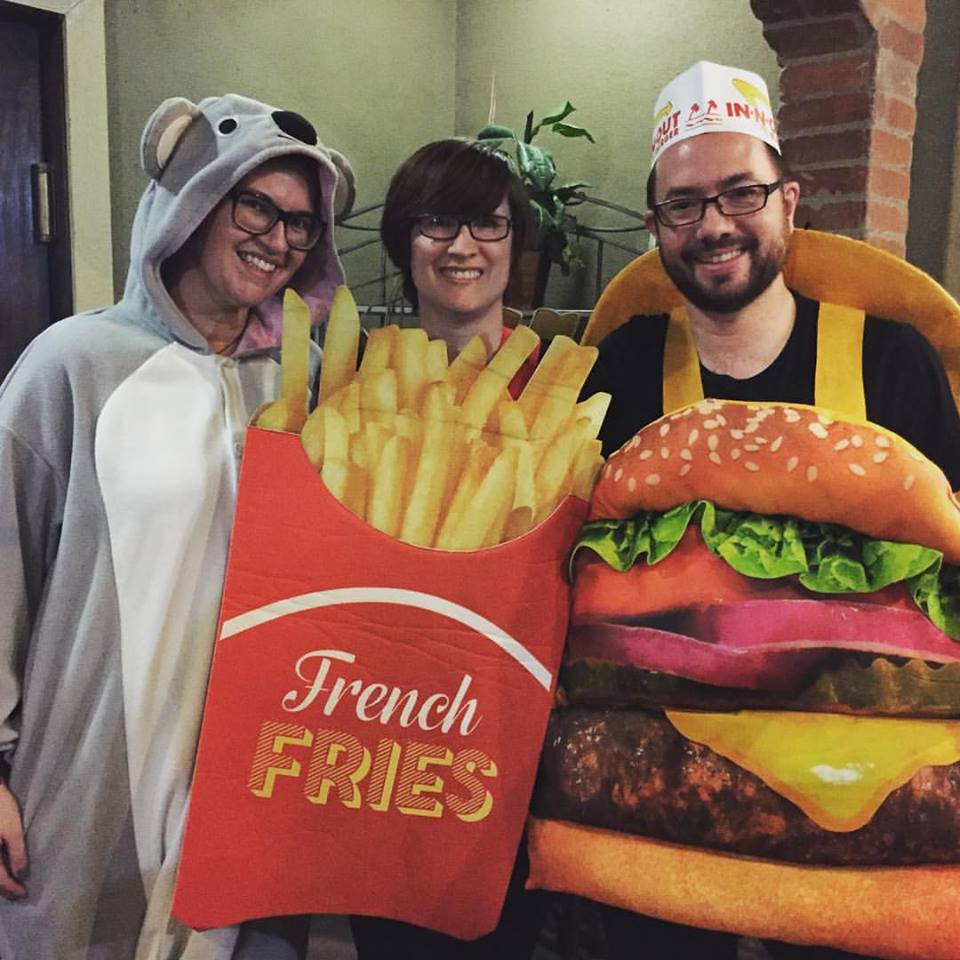 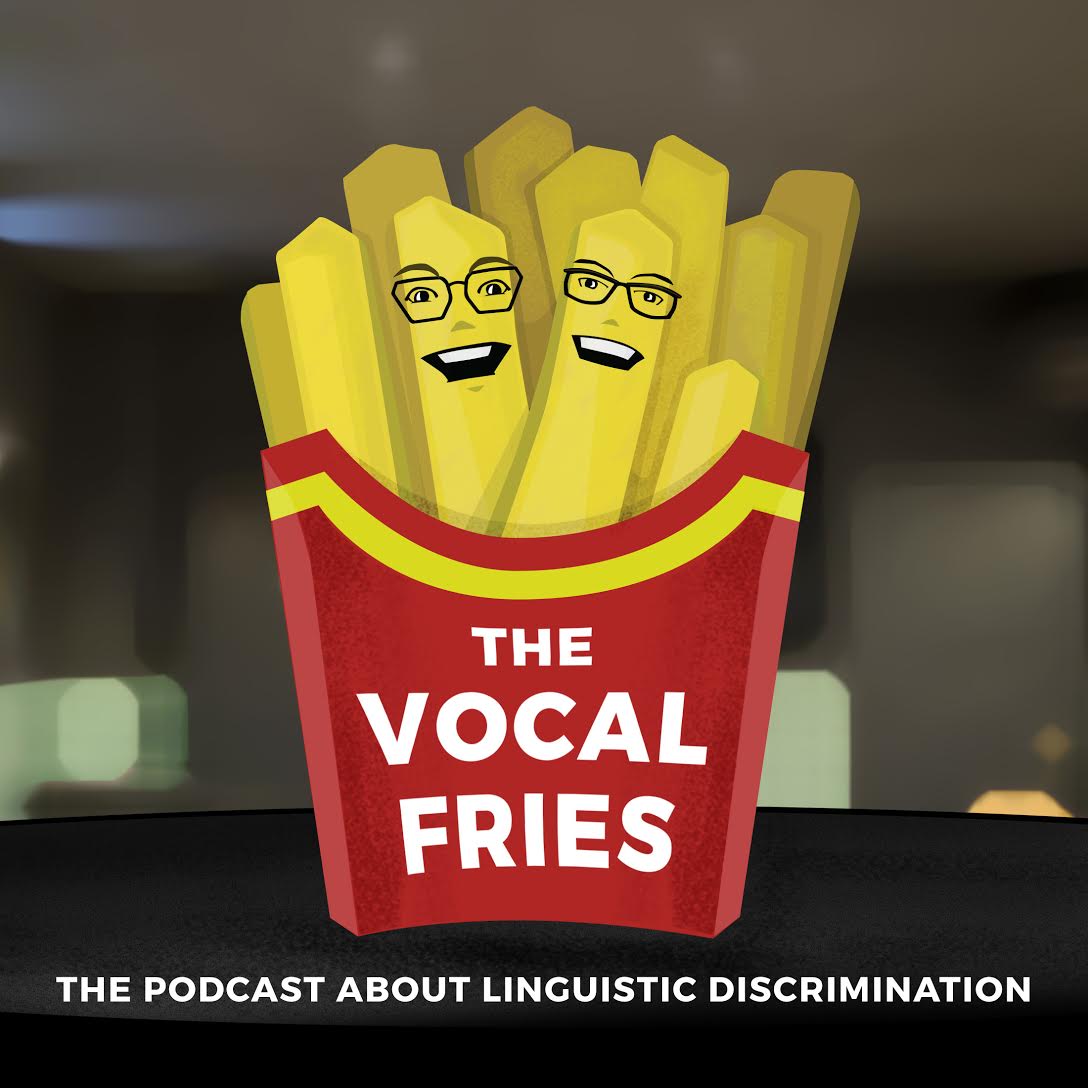 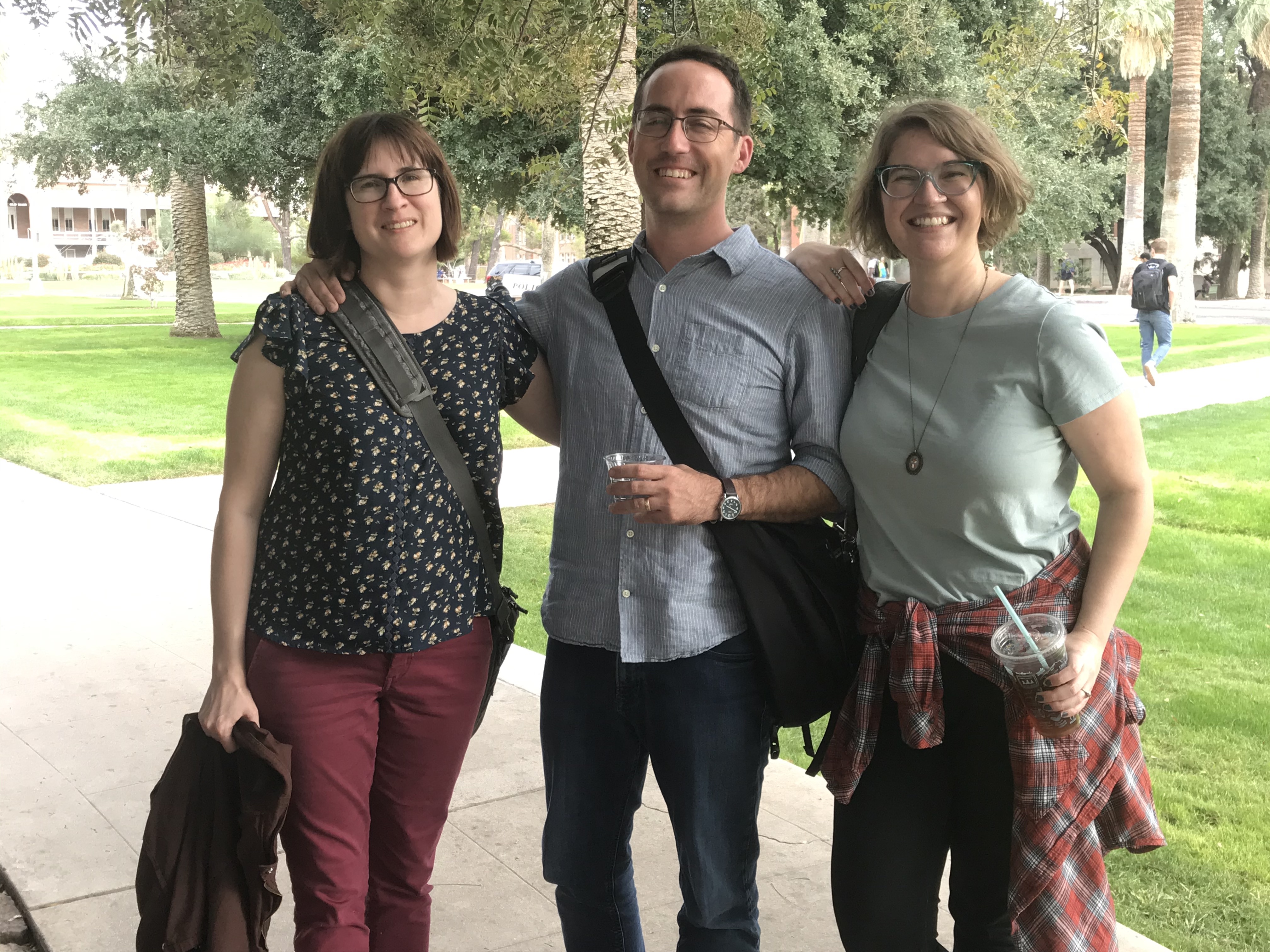 Image Credit:
Chris Ayers for pictures of me with French Fries (real and fake); other photos uncredited.