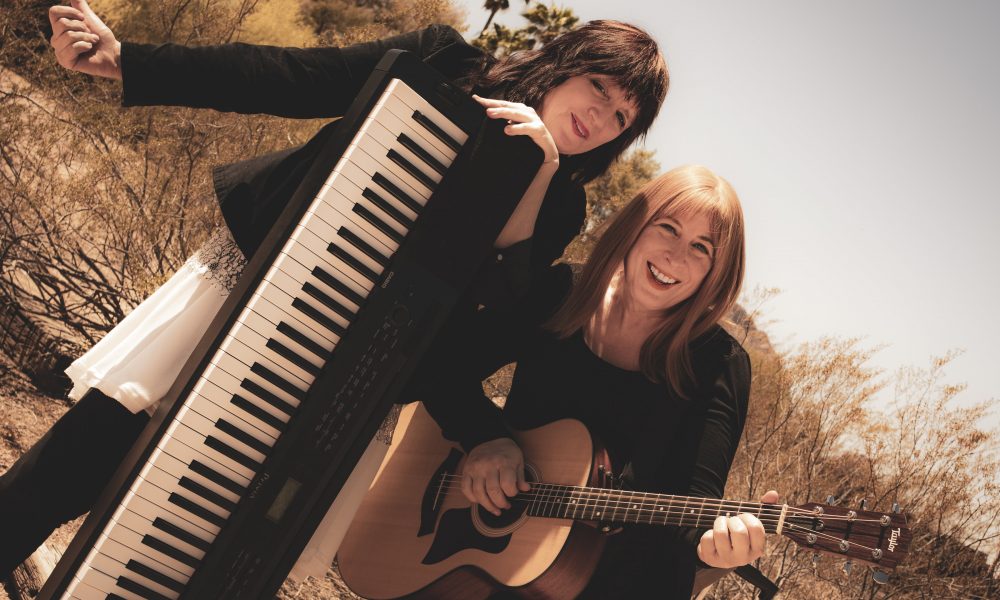 Today we’d like to introduce you to Rachael Nicole Gold and Annie Moscow.

Rachael and Annie met in high school. They shared diverse musical influences ranging from Debussy, Charles Ives, and the Beatles, to Herbie Hancock and Joni Mitchell.   Both had been studying classical piano since before the age of five.
Rachael, in her teens, took off into jazz and R&B, attending the Berklee College of Music in Boston and the Dick Grove School of Music in Los Angeles.  She recorded and toured with many well-known entertainers including Sister Sledge and Donna Summer.
Annie won a symphony competition at 16, then went on to study classical piano and jazz at Indiana University and work in musical theater.
In the 1980’s, Rachael and Annie began their collaboration as songwriters, getting their music placed in film and television, as well as recordings with artists ranging from Sarah Vaughn to Sister Sledge to Mickey Mouse.
In 1994, they founded their own record label, Melonball Music and wrote and produced a children’s CD “Land of the Diamond Sun,” which garnered three hits on national children’s radio. Spurred on by the success of “Land of the Diamond Sun,” they formed the duo, “Melonball”, and toured for the next six years as children’s artists.
In 2000, Annie took off on her own, developing a folk/pop singer-songwriter style.  She went on to release five solo CDs, four of them produced by Rachael on their Melonball label.  In 2006, she returned to her musical theater roots, writing and performing shows for the next eleven years for the Herberger Theater, all based around her original music.
Rachael continued to perform and tour with major acts, and work as a composer/producer for a variety of clients including the Arizona Science Center and Fort McDowell Casino.  Eventually, she too began charting her own path as a solo singer-songwriter.
In February 2018, a creative collaboration between Annie and Rachael was reborn when they decided to come together once again for a show at The Nash, Phoenix’s premiere jazz club, highlighting both their original music.
The concert was an overwhelming success and one month later, Annie and Rachael were invited to join international theater artist Taylor Mac onstage to perform the song “Girl on the Road”, by Ferron, at the Gammage Auditorium in Tempe.
“We discovered a renewed appreciation of the full depth of how well we work together, as well as the originality of our musical fingerprint,” says Annie.
Gold and Moscow named their new duo “Girls On The Road,” partially after the song they had recently worked on for Taylor Mac, but mostly because it resonated so strongly with their mutual goals of seeing the world and creating new music.
Great, so let’s dig a little deeper into the story – has it been an easy path overall and if not, what were the challenges you’ve had to overcome?
“Our challenge is the bringing together our diverse influences and finding the blend that pulls the best from both of us,” says Rachael.
Annie’s biggest challenge was that she has always been primarily a pianist.  Prior to “Girls on the Road” she had little experience programming and performing on a keyboard synthesizer.
Rachael, on the other hand, had worked with synthesizers her entire life and is the primary orchestrator of the “Girl’s on the Road” sound.  Her challenge is to continually find the best arrangements which highlight both their strengths.
Girls on the Road – what should we know? What do you guys do best? What sets you apart from the competition?
We’ve worked together on and off for over 25 years.  We come to this new collaborative incarnation as seasoned professionals with a huge well of influences and experiences to draw from, which is reflected in our unique sound.
Our genre can best be described as folktronica fusion.  The instrumentation is sparse, but deeply flexible—no sampling, no looping, two synthesizers and an occasional guitar.  Or, as Rachael puts it, “Two singer/songwriters, two keyboards.  If we can’t play it ourselves, we don’t do it.”
“Our harmonies are tight, and people often comment that we seem to be able to read each other’s minds,”
says Annie.  “ Which makes sense, because fortunately or unfortunately, we can.”
“But, at the core,” Rachael says, “we are performing our heartfelt originals, painting musical pictures while exploring the full range of the synthesizers.”
Hence our byline – Techno with a Human Touch.
So, what should we be on the lookout for, what’s next in store for you?
We have just released a four-song EP of three originals plus an atmospheric cover of one of our favorites, “Field’s of Gold,” by Sting, which is also the title track.
We look forward to more recording, as well as traveling around the world as “Girls on the Road”, continuing to create, evolve and take our music to new places. 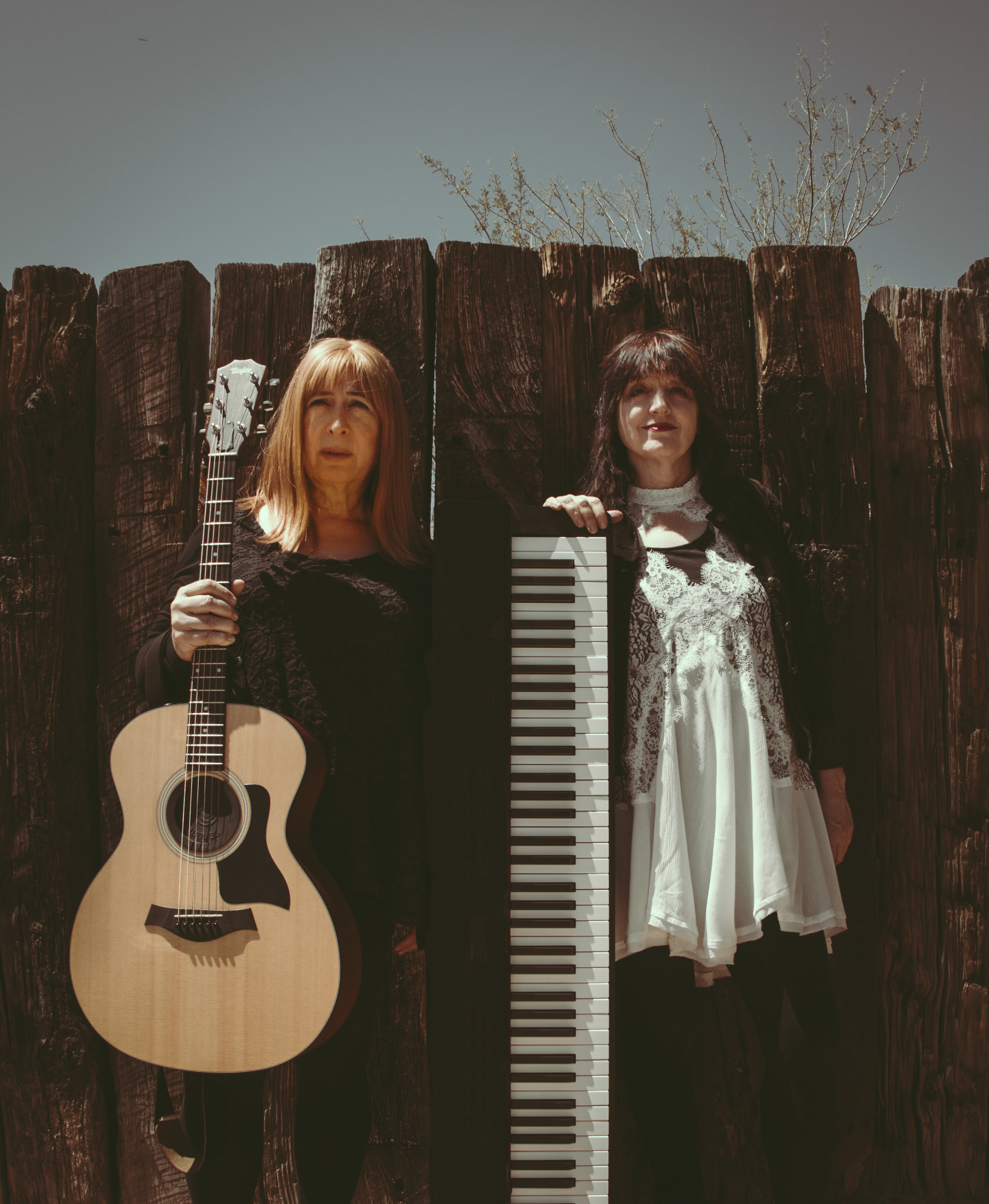 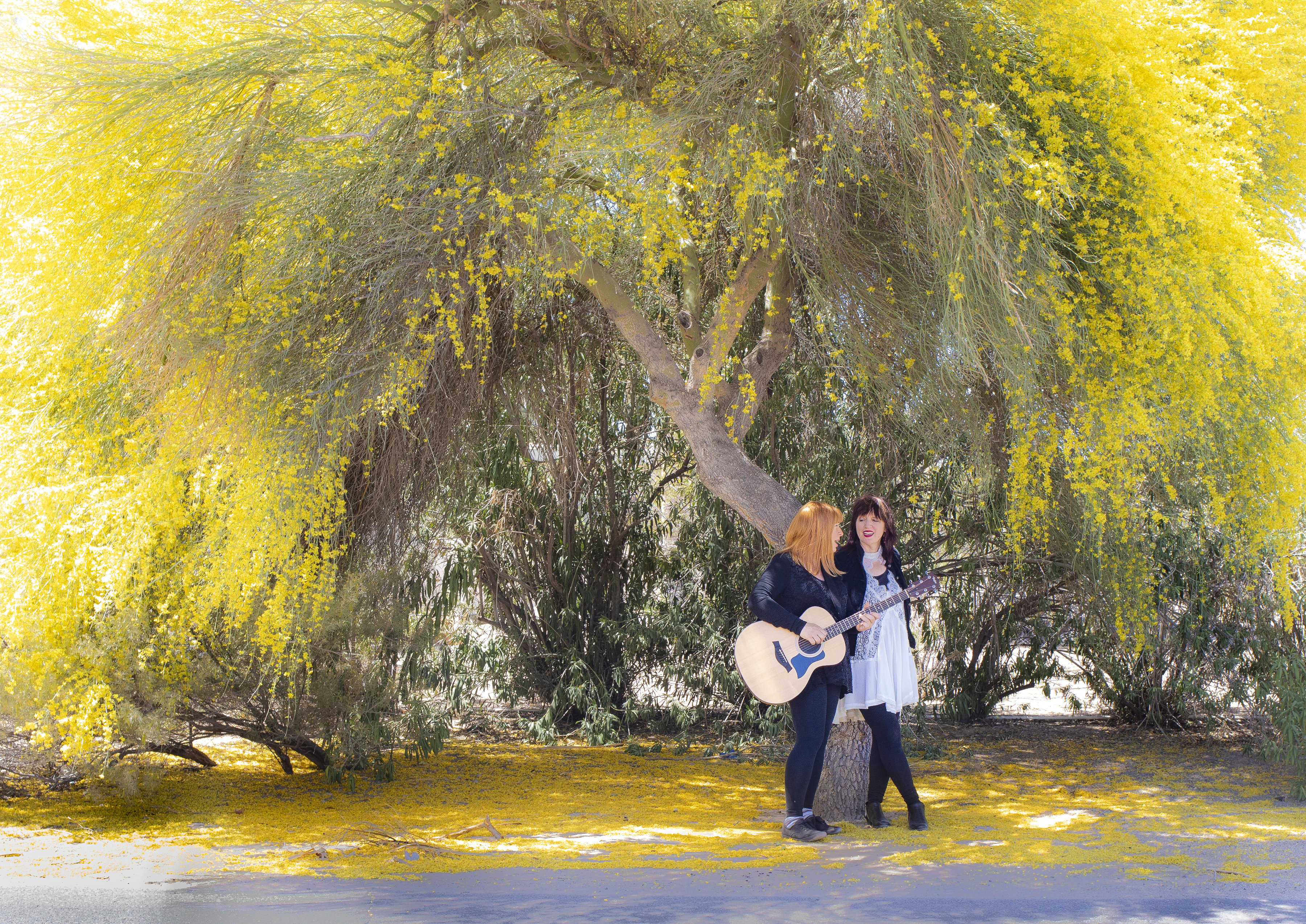 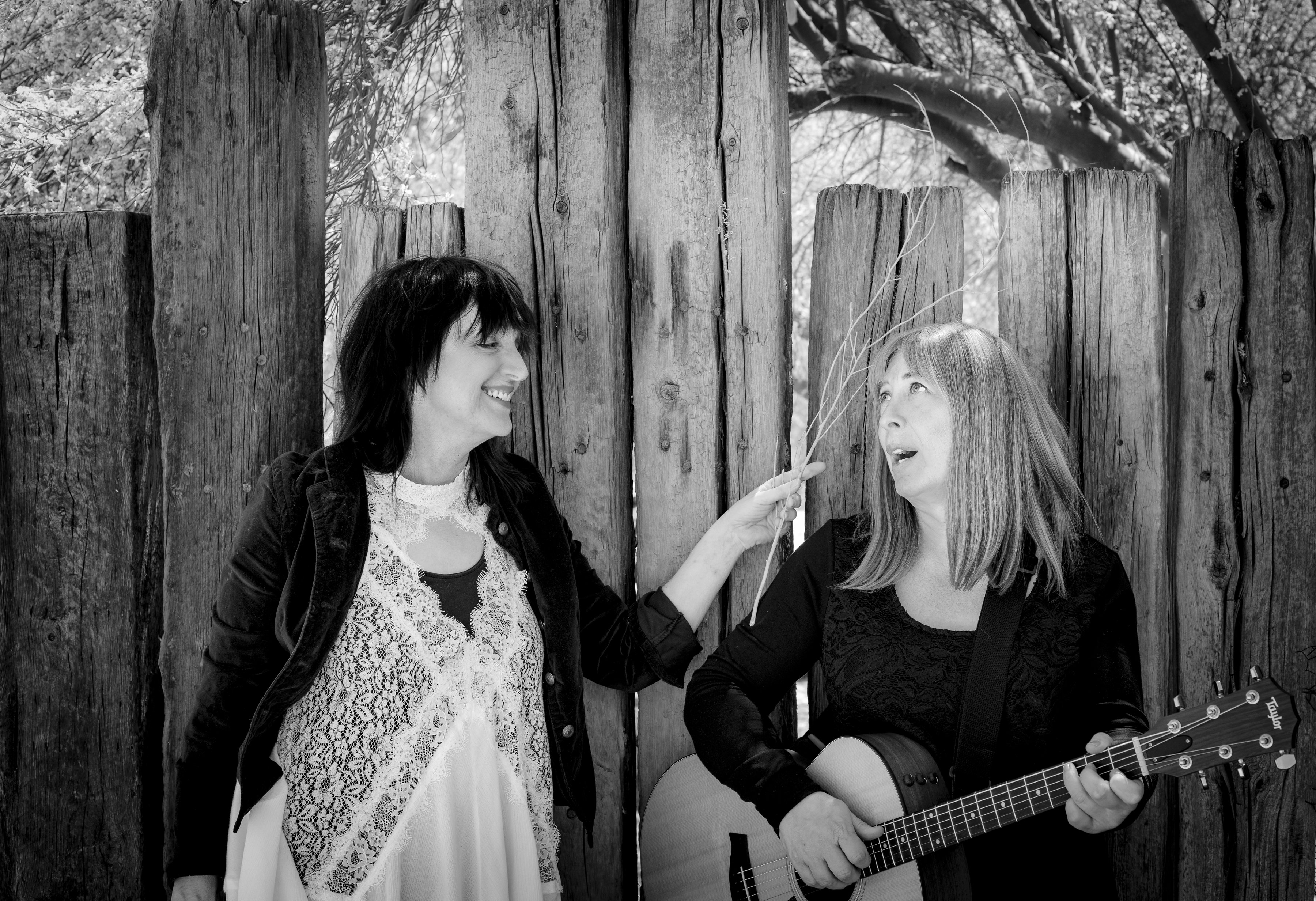 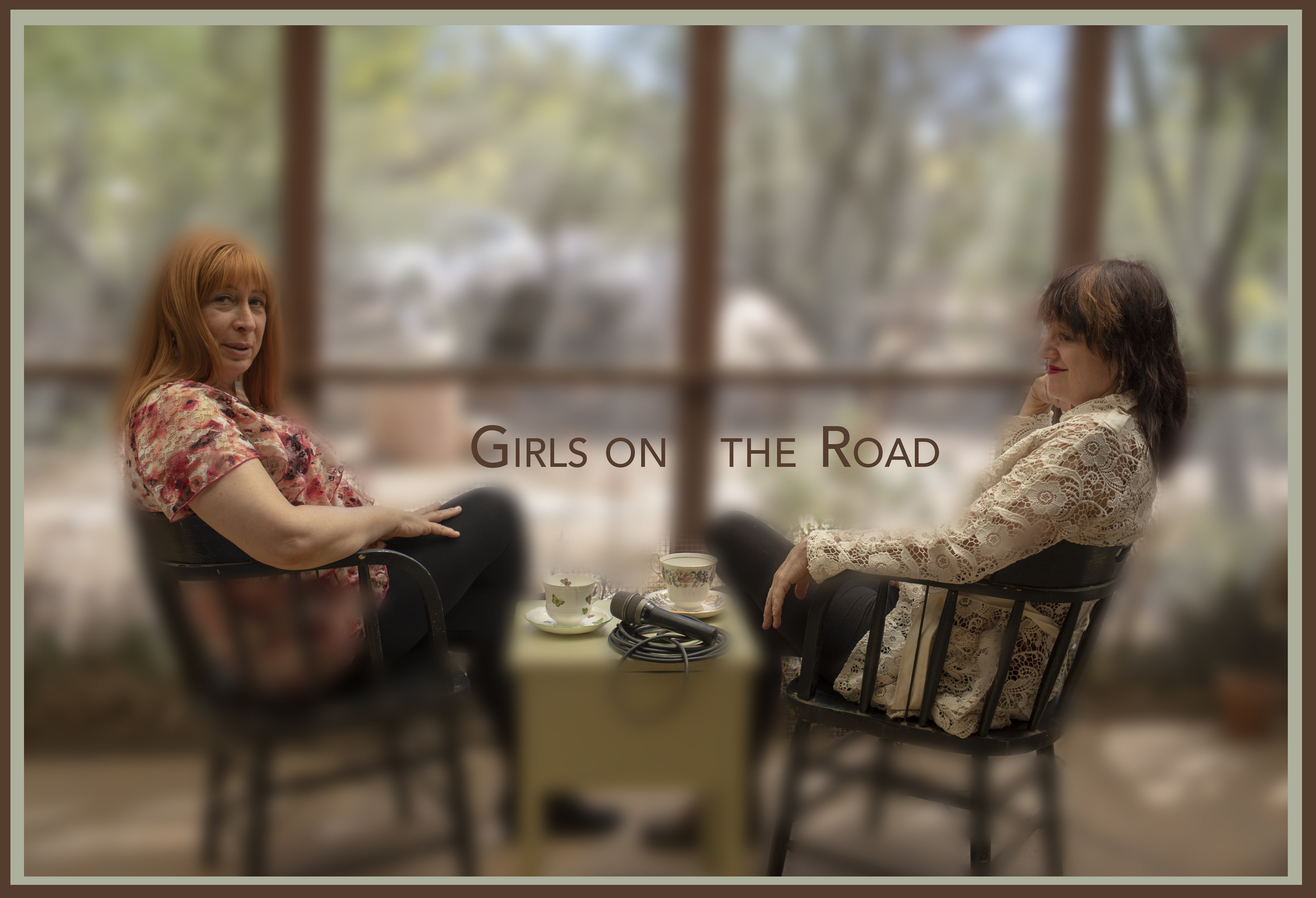 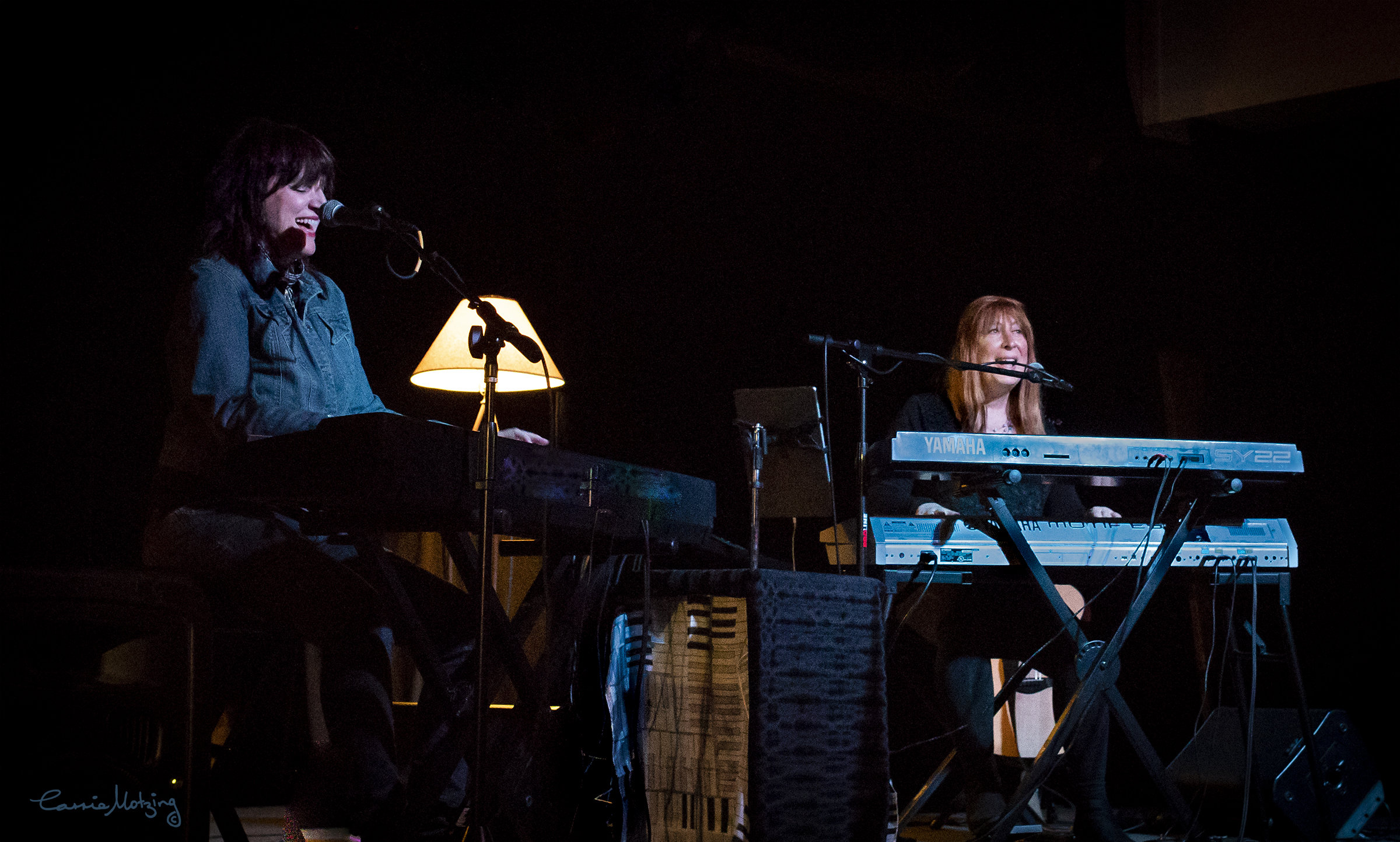 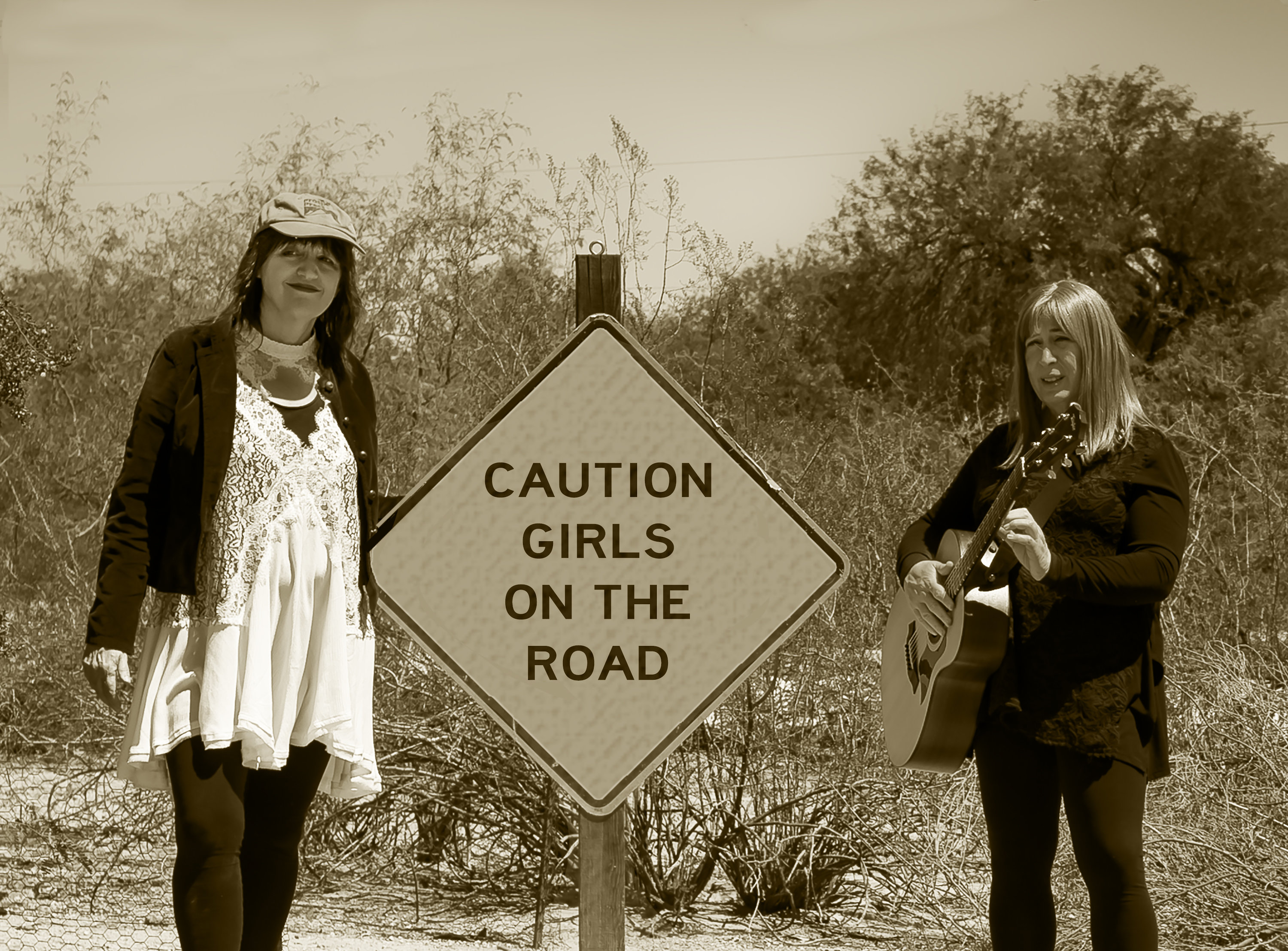