Meet Linda King of Fix the Hurt in Mesa 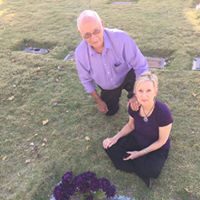 Today we’d like to introduce you to Linda King.

Linda, can you briefly walk us through your story – how you started and how you got to where you are today.
I have Southern roots. I was born in Nashville, Tennessee and grew up in East Texas, and lived in Florida for 18 years prior to moving to El Paso in 1998. After raising her children and being a full-time mom, serving on PTA boards and working in the community with her church, I decided it was time to stretch myself and become an active advocate for organizations who could use an extra voice.

Soon after moving to El Paso, I began as a volunteer for The Center Against Family Violence. In September 2001, my husband, John and I experienced a great tragedy in our lives when our 28-year-old daughter, Lisa, was murdered by her ex-husband. I began working even harder to make my voice heard in the community. I served on the Board of Directors for MADD and the Coalition for the Homeless. I had spoken to thousands of high school and middle school students about dating/domestic violence.

In 2005, we relocated to the Mesa Arizona area, and I volunteered in the Victims Assistance Program for Mesa Police Department, and Gilbert CAN Steering Committee. I am certified by Az County Attorney’s Office as an Advocate, also received advocate training from the Mesa Police Department by the University of Texas Victims Services as an Outreach Specialist and advocate trainer. When the AZ East Valley DV Fatality Review Team asked me to be a part of their team, I was excited to work with amazing people for four years, and as a panel member for the National Domestic Violence Review Team Initiative/Conference in 2013.

In 2007, I formed Fix the Hurt Corp, a not-for-profit, domestic violence awareness, and prevention organization. Fix the Hurt has developed numerous programs for presentation to schools, corporations, civic organizations, and the prison system. As we searched for the best possible way to bring our message to light, we focused on the performing arts. With my husband at my side, we have produced “Domestic Violence, The Musical?”

A one-hour play which engages the audience in the fight to end domestic violence, hold the abuser accountable and empower the victim. By the end of 2019 season, “Domestic Violence, The Musical?” will have been viewed by over 100,000 people. Additionally, Fix the Hurt has produced Control.Assault.Delete, a 2-person play, and a teen dating violence play/musical entitled, “I Have This Friend,” and most recently, “23 Bruises.”

It brings peace to my heart when I see that our message truly reaches someone. I have hundreds of stories from people who were either family members, friends or co-workers of victims or abusers. They want to talk to someone who “gets it.” I get it!

Great, so let’s dig a little deeper into the story – has it been an easy path overall and if not, what were the challenges you’ve had to overcome?
The message is not pretty, it’s really not something people want to hear. When we entitled our first musical, “Domestic Violence, the Musical,” we were met with skepticism – I can understand why. It has proven to be one of the best decisions we have made. Take a chance – put it out there and believe you got it right.

Trying to get a writer that is willing to take your story, your intentions and your passion and deliver what you want is hard – lots of nights when we would shake our heads and wonder what we were doing in the world that was foreign to us – performing arts and a musical at that – but it worked. Getting people to listen long enough to your message to convince them that your message would resonate with the audience was difficult at times. Our breakthrough with the military was a long road, but we did it. Our plays/training have been identified by commanding officers as the very best domestic violence training they have ever seen.

Just about the time things fall into place, and all six actors know their lines, mesh with each other, and you think you have a cast for the season, someone drops out for various reasons and you scramble to get another actor/singer auditioned, rehearsed just in time for a trip to Ft. Drum, NY, Ft. Leavenworth, KS, Sheppard AFB, Iwakuni, Japan and all places in between. The mission is worth it all — knowing that Lisa lives on in the lives her story has touched.

Alright – so let’s talk business. Tell us about Fix the Hurt – what should we know?
There is as much satisfaction from sitting across from an 18 yr old girl who is terrified to leave her boyfriend and asks you to sit with her while she calls and breaks up with him, as there is in appearing before 600 airmen on stage at Holloman Air Force Base.

Our favorite audience may be prisoners at Perryville Women’s Prison. We have presented our play, Control, Assault, Delete five or six times. These women have lived lives of abuse that turned them to drugs, crime, loss of their children, and sometimes murder. They want to hug us and cry on our shoulders and thank us for understanding abuse and what it does to the victims, their families and friends.

Our methods are unique as we offer training, difficult reality, entertainment, and even a touch of comic relief. Our actors become like family. Some of them have realized as we go over and over scripts, that their own lives have stories of abuse to tell.

Is our city a good place to do what you do?
Phoenix/Mesa/Peoria/Tempe have amazing talent to draw on. ASU has directors, students, and professors that will focus on a social issue and listen to your ideas and dreams. The airport here is a hub for any direction our travels may take us. 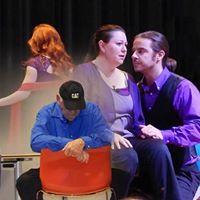 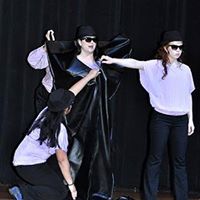 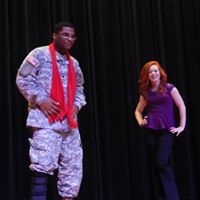 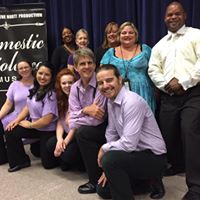 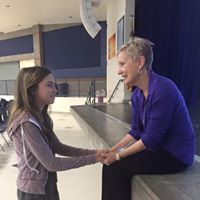