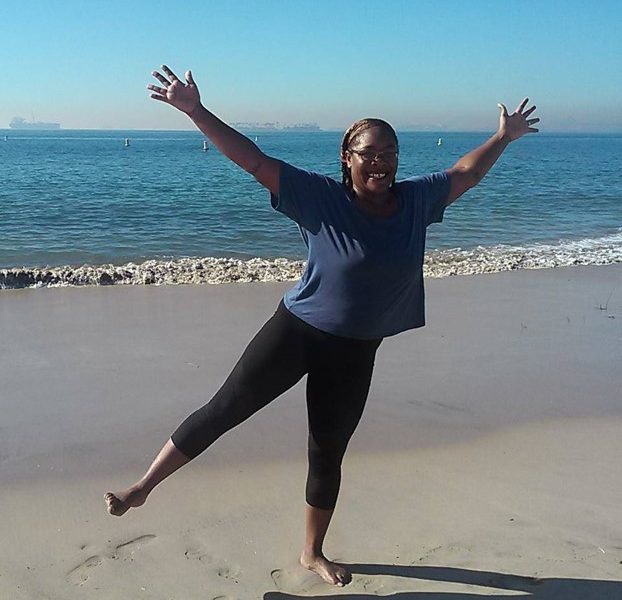 Today we’d like to introduce you to Kimberlee Morrison.

Kimberlee, can you briefly walk us through your story – how you started and how you got to where you are today.
I’m a freelance writer and a yoga teacher. I started writing very young but got pretty serious about it as a student at Wilson High School in Long Beach, California. I was part of a group called the Freedom Writers and co-authored/edited “The Freedom Writer’s Diary,” which became the basis for the movie “Freedom Writers.” The experience was formative and led to a full scholarship to CSULB, a European book tour, and lots of public speaking opportunities.

Beyond the book, I’ve been an editor at a business blog startup and Entrepreneur magazine; I’ve edited fiction and non-fiction books; I’ve been a blogger for AdWeek; and my work has appeared in FastCompany, Inc., Business Insider, CMO, TIME and even a few digital upstarts that don’t exist anymore.

In 2012 I moved to Arizona when a friend recruited me to work an Infusionsoft. The transition was super hard and yoga became the thing that kept me centered when I felt like I was drowning. I had been practicing yoga for a long time, but really tapped into it just before I moved and was so grateful for the practice during one of the most stressful times of my life.

The job at Infusionsoft wasn’t a great fit, so a year after I moved to Arizona I was back to freelancing. During my time at Infusionsoft though, I became very passionate about yoga and leaving the full-time employee lifestyle behind opened up space in my life to pursue that passion. A teacher and the owner of Gilbert Yoga — the first studio I went to in the Valley — suggested I check out the Southwest Institute of Healing Arts (SWIHA). Not only did I enroll in Yoga teacher training, I enrolled in a 600-hour year-long program, and moved to Tempe so I could walk and bike to school.

I completed my 200-hour certification in May of 2015 and shortly thereafter, my friends started sending me messages telling me CorePower was coming to Phoenix and that I needed to audition. These messages weren’t entirely random; I practiced at a CorePower Yoga in Huntington Beach and while I had found some great yoga in the valley, none of it was CorePower. Apparently, I made this very clear to my friends!

For me, it was a no-brainer. I sent a long email about my yoga journey and was invited to audition. The process was intense and included intensive training and a second audition — all while still writing and working through the rest of my advance training at SWIHA — and started teaching at the first CPY Phoenix studio when it opened in the Fall of 2015. I’ve since completed my advanced training, worked at other studios, and recently picked up a class at SWIHA, but I’ve mostly focused on teaching and growing with CorePower.

So now, in addition to writing, I teach yoga. Becoming a yoga teacher has made me a better writer and a better business person overall. Despite many years of public speaking with the Freedom Writers, I was still one of those people scared to death of standing in front of others and talking. I was super introverted and spent a lot of time alone. I still enjoy my solitary writing time, but I also love getting out and connecting with people in my various yoga communities.

We’re always bombarded by how great it is to pursue your passion, etc – but we’ve spoken with enough people to know that it’s not always easy. Overall, would you say things have been easy for you?
One of the biggest challenges with being an independent worker is fluctuating income.

And while I had a small severance cushion from Infusionsoft, it ran out before I had really gotten my freelance footing back under me. So when the savings and severance ran out and my freelance income still wasn’t enough to support the lifestyle I had established, I went through a bit of a financial free-fall. We’re talking weekly trips to food banks, borrowing money for rent, and having my car repossessed. It was not pretty.

Obviously, that didn’t last long, but I did learn to go super lean and live within my means. In fact, this lean period was part of the reason I moved so close to SWIHA and pretty much lived in ASU off-campus student housing while I was in training.

Fortunately, my AdWeek column started attracting leads and the same friend that recruited me to work at Infusionsoft asked me to work with him on a freelance basis.

With a few long-term contracts, things started to balance out. And I was so excited about teacher training. Yoga became a bigger and bigger part of my life. I was practicing every day, sometimes two or three times a day, making new friends and really immersing myself into a yoga lifestyle. But halfway through that first 200 hours, I got sick. It started as stiffness in my neck and shoulders and progressed to the point that it was all I could do to show up and sit through training, even when everyone else was moving.

One day I woke up and I was in so much pain, I just started crying. I didn’t have a phone (I still don’t have mobile service) and my internet was down for some reason, so my husband (oh yeah, I got married somewhere in there!) and I walked to SWIHA to use the computer room so I could use Google Voice to call for help. Kim Bulloch, my friend and mentor at the time, didn’t ask a single question. She dropped everything, picked me up from SWIHA and took me to the emergency room.

The doctors weren’t able to diagnose anything that day, but they sent me away with a recommendation to see an oncologist. I didn’t have any insurance and couldn’t afford any of the packages made available under the Affordable Care Act, so I applied for AHCCCS (Arizona’s version of Medicare). At first, I was denied but appealed that decision and for a year, I had access to free medical care.

During this time I saw a bunch of doctors and it was almost a year after the symptoms first appeared that I was diagnosed with Lupus — an autoimmune (inflammatory) disease where your immune system overreacts and attacks your body. I had been inactive “flair” for probably more than a year, and once I started receiving medical care and treatment, I slowly started to feeling better.

While all of this was going on, I was still writing, still working through my YTT and shortly after being diagnosed, I added the intensive CorePower training to the mix. My life didn’t slow down but I did. In fact, I felt run down all the time. My energy never really rebounded to the pre-flair levels and I still sometimes struggle with fatigue. But I’ve learned to rest, to say no, to ask for help, and to eliminate foods that trigger an inflammatory response.

I am so grateful for my friends who were there to help me through some very trying and difficult times. More than anything, I’m grateful to my husband, who literally helped me get dressed and shower through my protests and tears. I couldn’t have asked for a better partner.

We’d love to hear more about your business.
As a writer, I specialize in helping businesses tell their stories. I’ve written a lot about technology, leadership and marketing, and do a lot of ghostwriting for executives and business leaders, often in the marketing technology industry.

There are some writers who chase bylines, but I’m not one of those writers. It’s really special to have someone trust you to interpret their thoughts and essentially become their voice. And while some writers would find it hard to adapt to different voices, I find that it’s really an exercise in setting my ego aside to tune into what my client wants to say, and how they want to say it.

As a yoga teacher, my focus is using yoga as a vehicle to empower people to tap into their biggest possibilities. What’s more is that I don’t fit the mold I don’t fit the mold of the skinny, white, contortionist yogi so popularized by Western influence. I’m Black and I’m a brick house; super strong, but definitely not slim. And while I’m probably more flexible than the average person who hasn’t been practicing yoga for 20 years, I’m definitely no contortionist.

Another thing that sets me apart as a yoga teacher is that after being sick and barely able to move for almost a year, I became very passionate about teaching yoga in an accessible way. In a way, you could say that getting sick was an important part of my education. I learned modifications and I’m even careful about using language that makes people feel empowered and strong.

The two might seem like disparate modalities, but as both a ghostwriter and as a yoga teacher, my job is to help others shine!

What were you like growing up?
As a kid, I was pretty athletic but also kind of a quiet bookworm. I loved school and learning, and read everything I could get my hands on. I excelled in English, History and science, and loved music. One of my favorite things to do was put on Janet Jackson’s Rhythm Nation album (yes, my mom had a record player) and recreate the choreography with my sister.

My mom kept us busy with activities and in the Summers, I went to a camp of sorts where we swam — all day from 9 in the morning to 6 pm — like it was a job. By the time I was six, I was a competitive swimmer and continued swimming for almost 20 years — including playing water polo at Long Beach Community College.

I was the oldest of four, so as I got older there was lots of responsibility for helping. This was especially the case when we moved from LA to Long Beach and my mom was busy working 80+ hours to support four kids, a disabled husband, and aging grandparents.

Swimming and writing were the things that really saved my life. Swimming was eventually replaced with yoga but the effect is largely the same: Zen through connecting breath to movement. 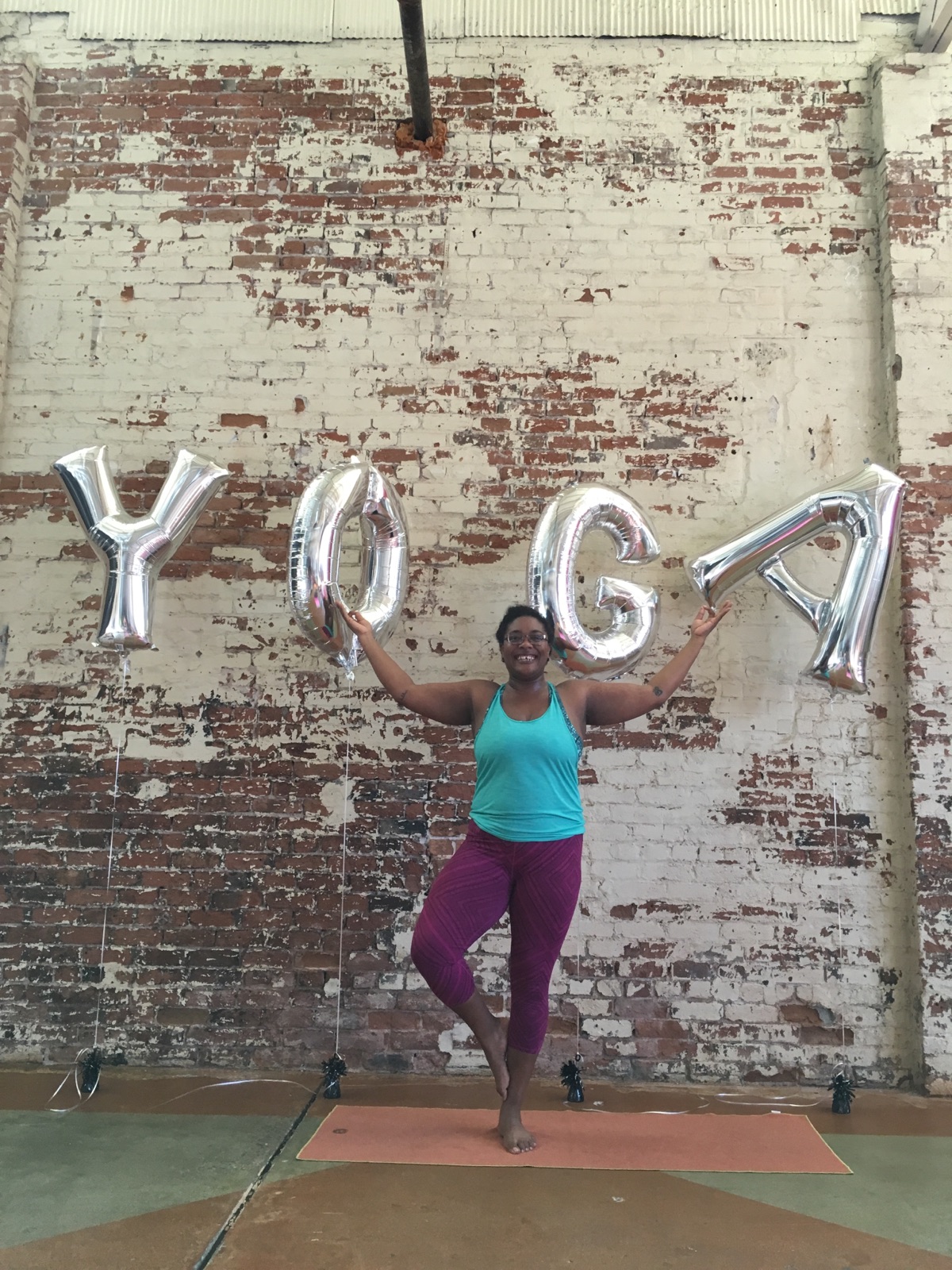 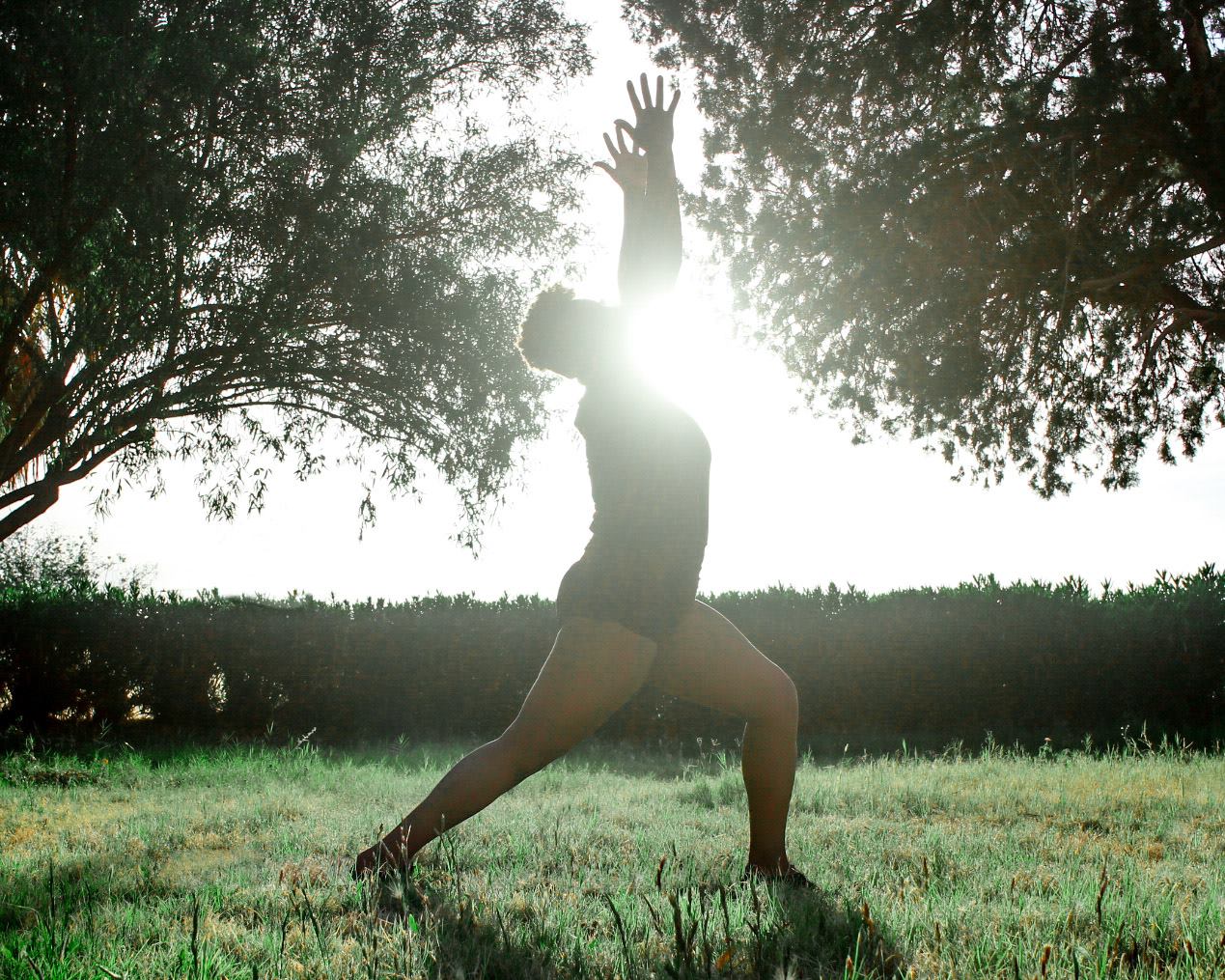 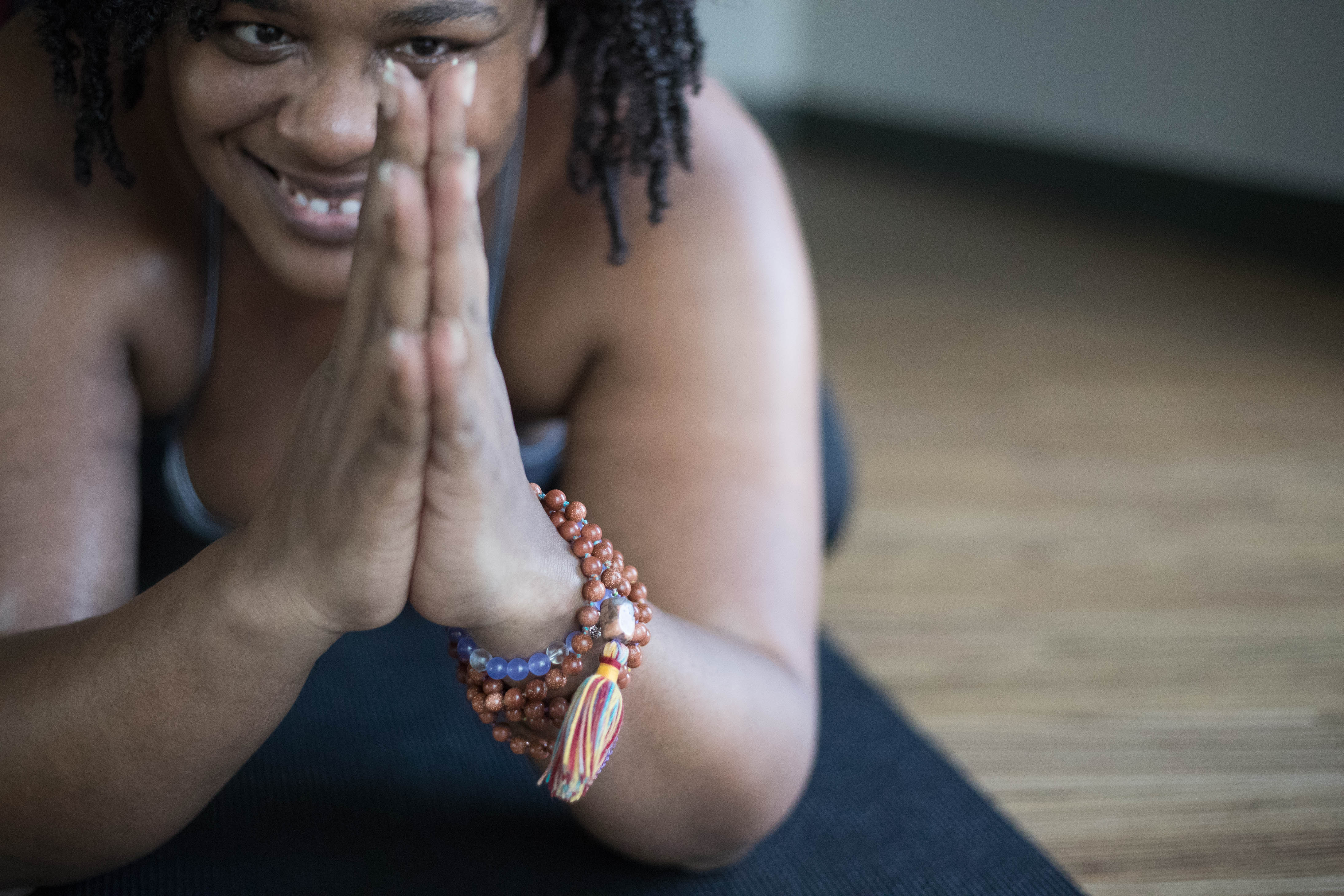 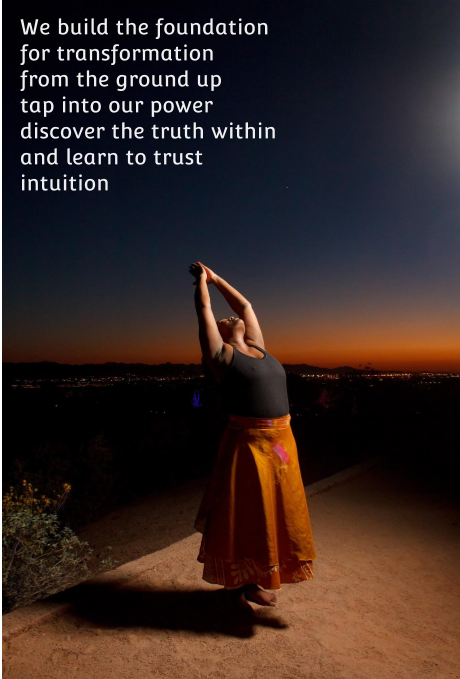 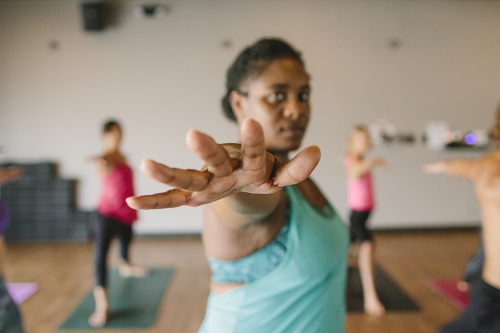