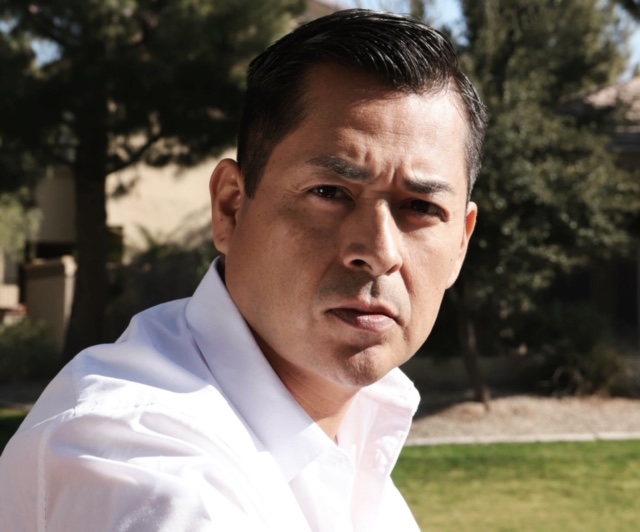 Today we’d like to introduce you to Jon Riggs.

Every artist has a unique story. Can you briefly walk us through yours?
I was born on the Navajo Reservation in a small town called Tuba City. I was then raised in a small town on the reservation called Kayenta Az near the Monument Valley area. My family was poor, and my mother had to work two jobs to support five kids. I never really got to know my biological father, My mother then remarried to Robert Gibbs who I looked up to since I was 6 yrs old as my father figure. Growing up he provided for us the best he could until his passing in 2002. After high school, I got married and a year later had my first daughter. My second daughter didn’t come until 8yrs later. I had started a business in automotive repair which I owned for 10yrs until I had to close the doors due to the economy change. I then got divorced soon after. I then needed to provide for my daughters being jobless and not having a place to stay so I got a job being a car salesman at a local dealership around 2011, I slowly moved up in the business but was not content, my true passion was in the entertainment business. When I finally got stable enough, I then started to take classes in acting and with the help of my mother paying for the expenses and trips to LA for my photo shoots. I started to get into modeling to help with exposure and getting acquainted with the industry and getting comfortable with the camera. Throughout my journey to find opportunities in films and acting I realized that it wasn’t easy getting a gig. I also got a lot of negative responses from friends and others on social media telling me that I could not get anywhere in the business and it’s virtually impossible. Refusing to listen to all the negativity I pushed forward in hopes that I will get my break.

As I continued down my journey, I began to support fellow Native entrepreneurs in Fashion and Filming just because I thought it was the right thing to do because there are not enough Natives supporting each other as it seemed. So I took it upon myself to do this unselfishly. I never asked for anyone to pay me for my visits to there shows or asked for anything in return, all I asked is that they showed the same generosity in return to fellow Natives that have dreams that they were pursuing. I still pushed forward with my dreams of making it big in the film industry, but things were not looking up for me. I then had an idea for a film so I started writing in my free time all while I am still holding up my 9-5 job to keep the bills paid. I stayed on it and still trying to make a name for myself in the native community, I would then start to be an advocate for (Anti-bullying campaigns) (Domestic abuse amongst woman) (Suicide prevention) I would talk to kids at schools to spread awareness. I continued to not lose focus of my venture to becoming an actor and was still motivated to finish my story which I thought would be a great movie, but at the time I did not know how to make that reality. Still not getting where with acting I still was still pushing despite all the disappointments of every casting director saying no. I felt that being Native American had a lot to do with me not getting anywhere. As I began to get more involved in film and media at this point I started to see a trend, that being I was never going to be that Native detective in a movie. I figured that the stereotypical native in a headdress was still very much alive which made it very difficult to land anything. I soon got remarried in 2017 to a beautiful Navajo woman from Shiprock NM. This was when I thought to myself that I need to make a change. At this point, I had been trying for 5 yrs to become an actor, and it was at this point that I also finished my first story to which was going to be a full featured film but is now become a series called ” The Highway Girl.” I can also say it wasn’t until now that my wife really pushed me to really just go for it and take a leap of faith to start my own business. So I quit my day job and started my Production company “Dark Whisper Productions.” I told my self that if nobody was going to hire me as an actor, I was going to make my own film and star myself as the lead actor. We started filming the trailer in the summer of 2018. We since had a lot of responses about the film from other filmmakers in Hollywood and Albuquerque’s studios wanting to invest in the film and some big-name producers and directors just giving me words of encouragement. I have moved forward with my company and started full time as the CEO of my company and also picked up another production company that owns 3/4 of NM incoming concerts and filming equipment. I picked up a huge investor recently, and now I am on my way. My mission is to be the largest Production company in the southwest. We will have a Film dept, Music Dept, Concert development dept, and Entertainment dept which will focus on all areas of on-stage entertainment. My all around goal is to make dreams come true and give others the opportunity to achieve there goals and dreams. I will still be helping and giving back by sharing words of encouragement to those with a passion and a dream also be proactive with promoting self-confidence, perseverance, positivity, and persistence.

Please tell us about your art.
I am an Actor, a movie producer, a director, a CEO of a production company called Dark Whisper Productions. I make films and also act and direct films as well. My production company makes movies, commercials, music videos, designs and set up concerts for music artist, comedians, speeches. We also look for talent as well to promote. I started by making films because I had started a book that related to Native ghost stories and decided that I would like to make my own films based on that book also it gave me the opportunity to star and be the lead actor in the series. I also wanted to make opportunities for my fellow Natives that also wanted a chance to be on film. I have seen a lot of talent on the Navajo reservation as I traveled from shows to shows and most of them are just trying to make it in the industry, but no one will give them the chance. So by also adding to being just a film company, I wanted this to be a well-rounded production company. I am also a motivational speaker; this is something I will continue to do because I was that guy that always believed and never gave up.

My message is to keep pushing and never to stop pursuing your dreams. It may take time nut all your efforts will pay off at the end, and also to stay humble and help those that helped you along the way. Support everyone because you were once in their shoes.

I hope they can find inspiration and hope that there are people out there that genuinely care about everyone, will always give back during their road to success. Most of all never to give up no matter the circumstances or what life throws at them. To work hard, dream big, keep.

My production company is as far as I know the first Navajo Production company that handles a variety of departments that will give Natives opportunities in every aspect of entertainment. My films will also not focus on a lot of the most common stereotypes of how society sees Native Americans.

What do you think is the biggest challenge facing artists today?
The biggest challenge I see is that there is not enough support going around these days. This holds true on the reservations. There are so many talented people out there in the world that everyone that has made it is only thinking about themselves and don’t consider that they were once there as well and know how hard it was coming up in the industry. I believe that giving back to the community in some shape or form will also bring you ten times further than you once were. I have faced this many times coming up. Other actors or filmmakers would claim to support you but when you just wanted some sort of direction or guidance they were nowhere to be found, or they just didn’t want you to be in their limelight. It is hard, but in my situation, I came up, and now they’re wanting my help or would like a part in my movies, you can only guess what my answer was at that point. NO!! So it is important to always help others because they may become larger than you and you will need there help.

How or where can people see your work? How can people support your work?
They can follow my facebook page @darkwhipserproductions or @Jon Riggs. Also on IMbd Jon Riggs. IG @official_jonriggs.

They can support me by simply following my Facebook page also Instagram and just share my upcoming films and acting reels. I will also have a web site up soon that will have my Dark Whisper Production merchandise for sale and upcoming events and casting calls for upcoming films.