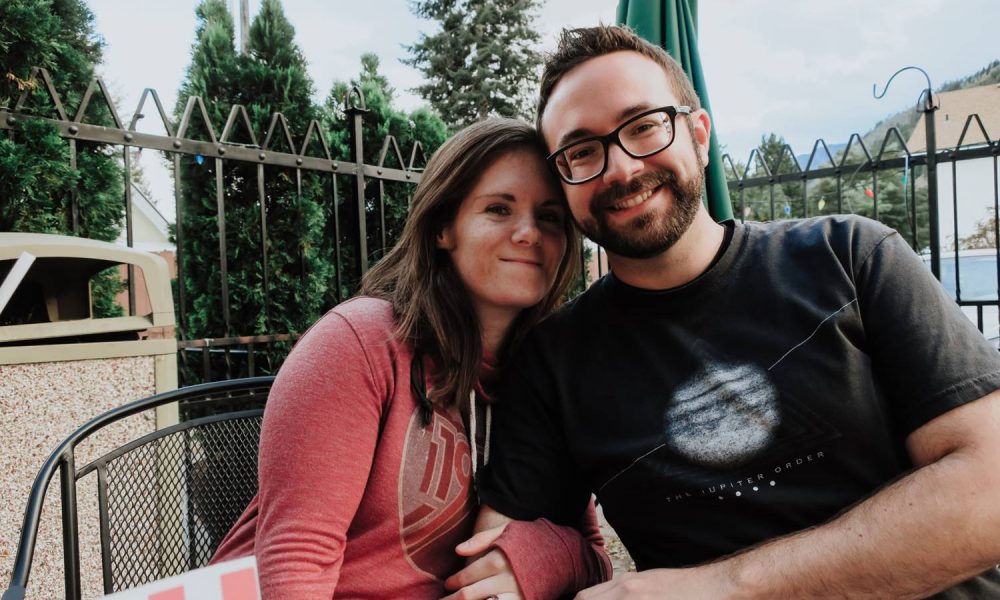 Today we’d like to introduce you to Jeff and Jessie Ross.

Jeff and Jessie, please share your story with us. How did you get to where you are today?
Jeff: I met Jessie inadvertently when I assumed she was someone else. Jessie has a twin sister, whom I had met a couple of months prior. I was playing an acoustic set in a Tacoma coffee shop on September 3rd, 2011 when I saw her come in and listen. She knew I was assuming she was her sister. Confusing, I know. It was followed up with two days of confusion as she and her sister enjoyed saying they were the other.

Before too long, Jessie and I were working on music together. We got married exactly five years later to the day. Prior to us meeting, I had been playing the guitar since 2000. I don’t come from a very musical family, but I found that this was something I really enjoyed. It wasn’t until 2010 when I started performing at local open mics throughout the Tacoma area. For the longest time, all I wanted to do was play the guitar. I had played the electric guitar in a very short-lived band in 2009.

I found the experience of performing very euphoric, and have been playing publicly ever since. I am primarily an acoustic guitar player, with my technique modeled after the great Lindsey Buckingham (of Fleetwood Mac). I challenged myself to learn a lot of complicated fingerpicking styles which really helped in my songwriting later. After Jessie and I met, it really motivated me to record what I had written, and she helped me complete my two EPs in 2012 and 2014.

For eight years, we played together all over the Puget Sound region of Washington. I was very fortunate to be a part of a fantastic community of artists and musicians. Most of us knew each other’s songs, so some nights ended up being a collaborative effort, rather than a single solo player, even if the evening was billed for one artist. It allowed all of our styles to evolve, and I know I’ve taken a few tidbits from my friends over the years.

Today, we are in Surprise, Arizona trying to reestablish ourselves into the Phoenix music community. We left the Pacific Northwest last July. Life threw us a curveball, and instead of reacting to bad news negatively, we used it as an opportunity to take a chance and try something new. Think of it as a life reboot. We are excited for what life has in store for us in this new chapter.

Jessie: Yup, my twin sister, Moe, mentioned some guy named Jeff and encouraged me to go check him out at his show. The minute I walked in, he looked up and said “HEY!” with such confidence that I knew he thought I was her… and I decided to let him believe it for the entirety of his set.

It wasn’t until he had finished and was packing up that we started talking and he ended up asking me a question I just couldn’t fake an answer to. I confessed that I was actually Jessie, but he didn’t believe me. Even after two days he was convinced that I was, in fact, Moe and had even gone so far as to create an alter ego profile on Facebook just to mess with him. It took him seeing us together to finally get him to believe me.

Then, a week later, he messaged me and asked if I wanted to go for a walk and get to know each other. Our relationship blossomed from there not just romantically, but musically as well. I’ve been singing since I was a kid, having a twin and older sister to practice harmonies with, and a mother who plays a large category of instruments herself to learn from. Eventually, Moe and I started writing songs together and performing at open mics and local coffee shops, her on guitar and me playing light percussion.

When Jeff and I started working together, we joined up with a good friend of ours and formed the band The Frosted Hearts. When we ended up having to reevaluate things and decided to move down to Arizona, it was nerve-racking at first, but the immense support and encouragement from the music community down here has allowed us to make a home here and continue to share a passion together.

Great, so let’s dig a little deeper into the story – has it been an easy path overall and if not, what were the challenges you’ve had to overcome?
Jeff: Performing is something I love to do. My day job(s) have always allowed for the freedom to do so. It’s my stress relief and my outlet. However, if I feel I’m doing it for the wrong reasons, I’ll start to slide away from it. Once I start catering to other people, such as learning cover songs that I don’t necessarily want to perform, I’ll start to disengage from music. It’s a fine line to walk.

More recently, moving away from the Pacific Northwest has been a struggle. Being away from friends and family has been difficult. We have to start from square one when it comes to our reputation in the music community, which took us years to build up North.

Jessie: Moving down to Arizona has definitely been a big challenge for us in many ways, but surprisingly, mostly in music. The music scene down here is amazingly different from that up north. Not in a bad way mind you, just in the process. Outside of the move, and at least for me, the biggest challenge I’ve faced in regards to music has been a combination of things.

Trying to perform regularly and even record an EP of my own has been tough to accomplish when working two jobs, one that involved 12-hour shifts. Then there was also my health interfering. Long story short, I was born with a condition called Camptodactyly, which means that five out of ten fingers don’t straighten for me. They are bent permanently and makes it physically difficult for me to play instruments.

For years while performing with my twin, I tried to take on the guitar, the piano, and even the violin. But no matter how hard I practiced, nothing could be done to bring the flexibility, strength, and dexterity required to really evolve on these instruments. It got to the point where I almost turned my back on music because I couldn’t “sit down and play with the big boys.”

That changed however after Jeff and I met and he refused to let me give up. He suggested that I try the Ukulele and find a method that worked for me. I headed his advise and eventually got to where I am today. There are still plenty of chords and picking patterns I will never be able to perform, but what I’ve got is better than not playing at all.

We’d love to hear more about what you do.
Jeff: I’ve been playing the acoustic guitar for almost 20 years. We are a singer-songwriter duo. Some people would call my playing style as “acoustic folk,” “magic fingerstyle” or simply refer to me as “the musical wonder bra” due to my ability to jump in and support other artists with my playing style seamlessly (thanks to PNW artist Gina Belliveau for coining that last one). I get more joy from playing with other people than I do by myself.

I took six lessons when I was 12. After that, I wanted to learn what I wanted, so I listened to music I enjoyed and learned by ear. To compliment my style, my songs are often story-driven. I’ve written about obscure subjects like zombies, aliens, and even Super Mario but they’ve been masked between the lines and melodies that you wouldn’t realize it unless you were told.

Jessie: Before taking on the Ukulele, the songs I wrote were very story driven; inspired by made up scenarios and acapella. Now, as I continue to grow as a Ukulele player and begin to tackle the Tenor guitar (four strings is my jam!), I find myself beginning to become more comfortable with expressing my own feelings and telling my own stories.

Together, Jeff and I like to label ourselves as an acoustic singer/songwriter duo. We prefer playing our own original work as much as possible, but find that, when covers are encouraged, we tend to lean towards the folk artists and storytellers from the ’60s, ’70s, and ’80s.

If you had to go back in time and start over, would you have done anything differently?
Jeff: I would have learned how to read sheet music. Or maybe pay attention in 4th-grade music class. I was the guy in the corner who didn’t know how to play his recorder. I mimed the whole time. I’m paying for it now.

Jessie: I would have done research on those who perform with “disabilities” to see how they managed to overcome that obstacle and on alternative ways to play music. I would have also tried to have more faith in myself and not let that little critic inside my head bring me down so much. 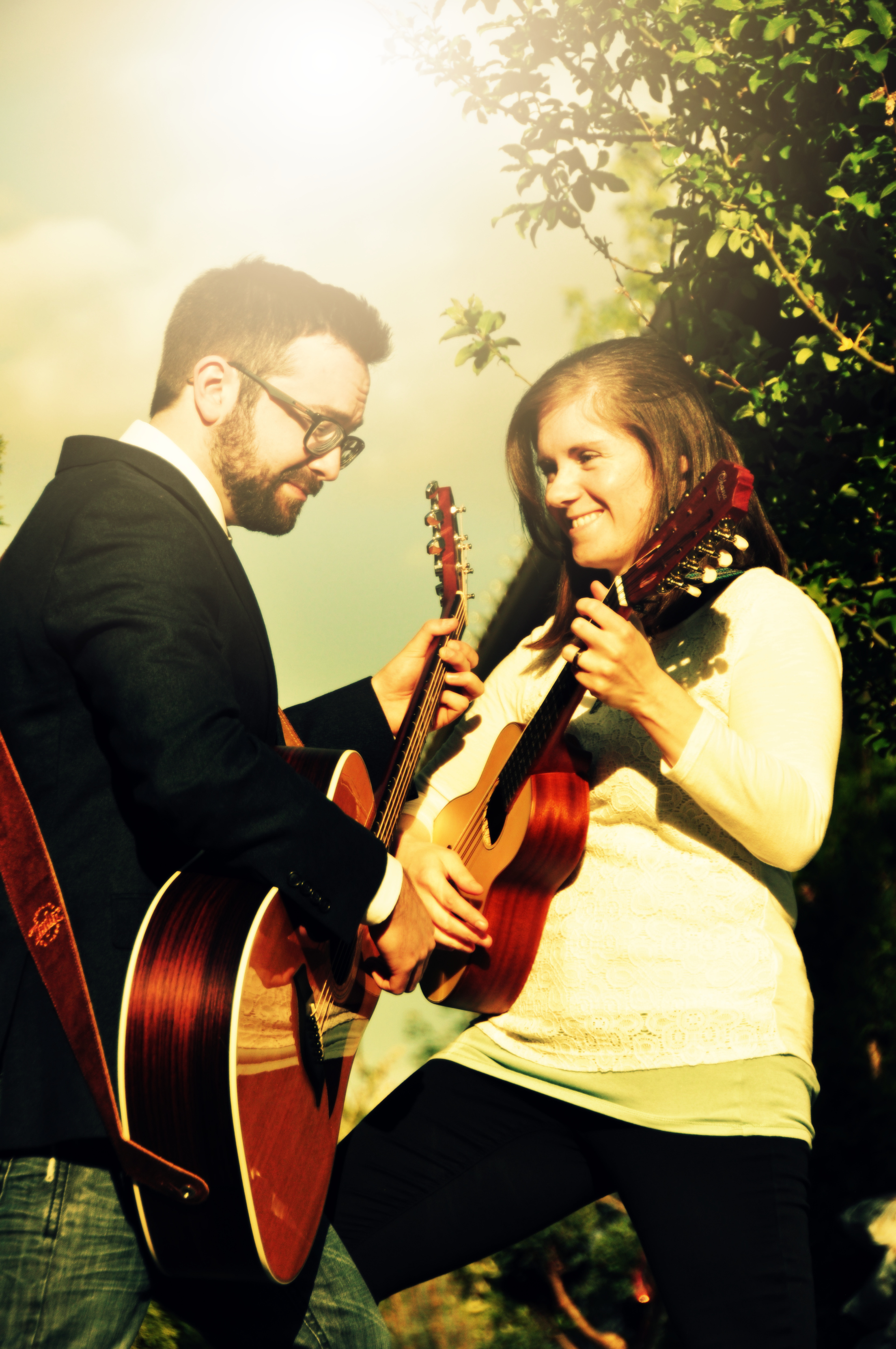 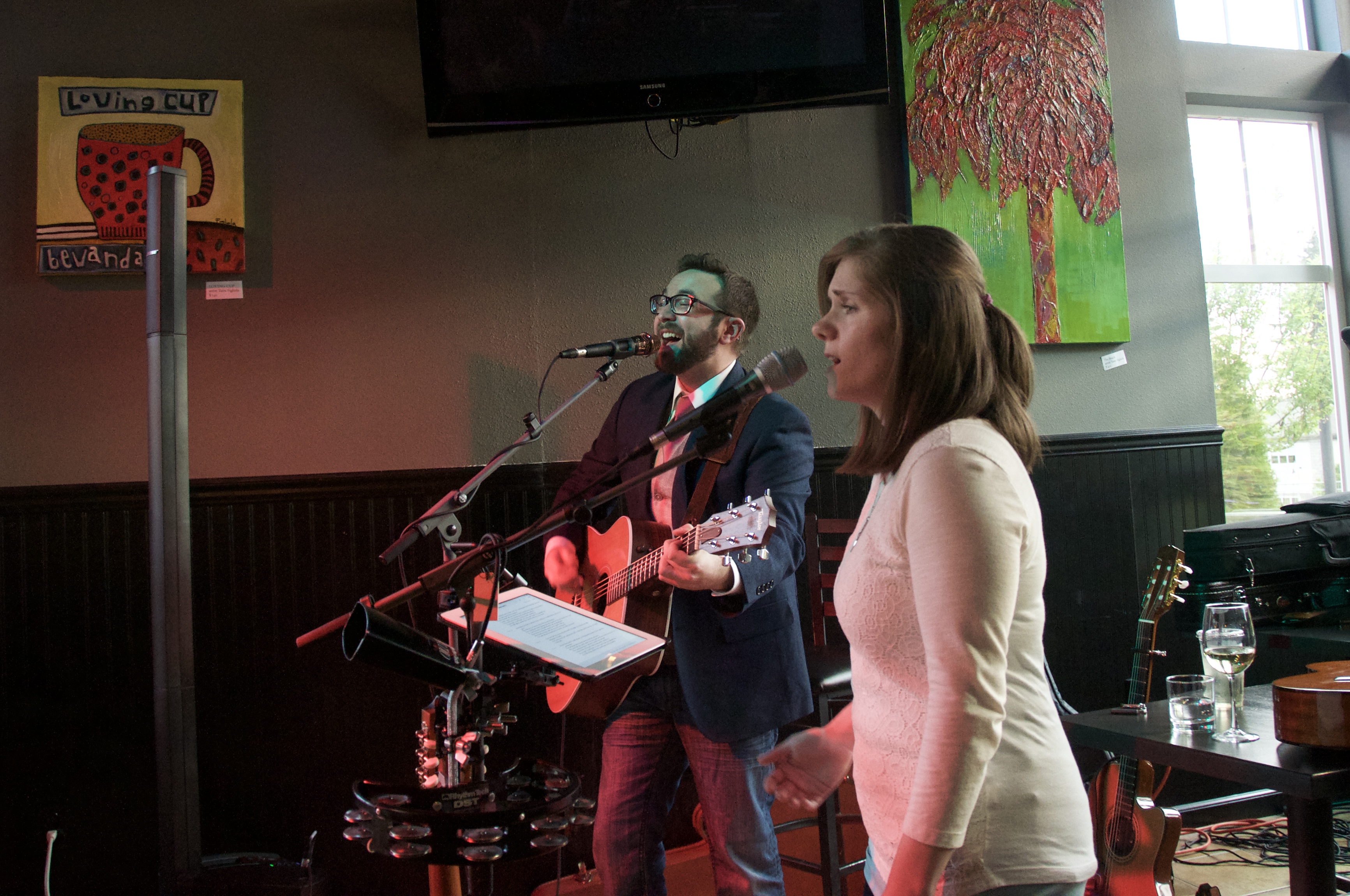 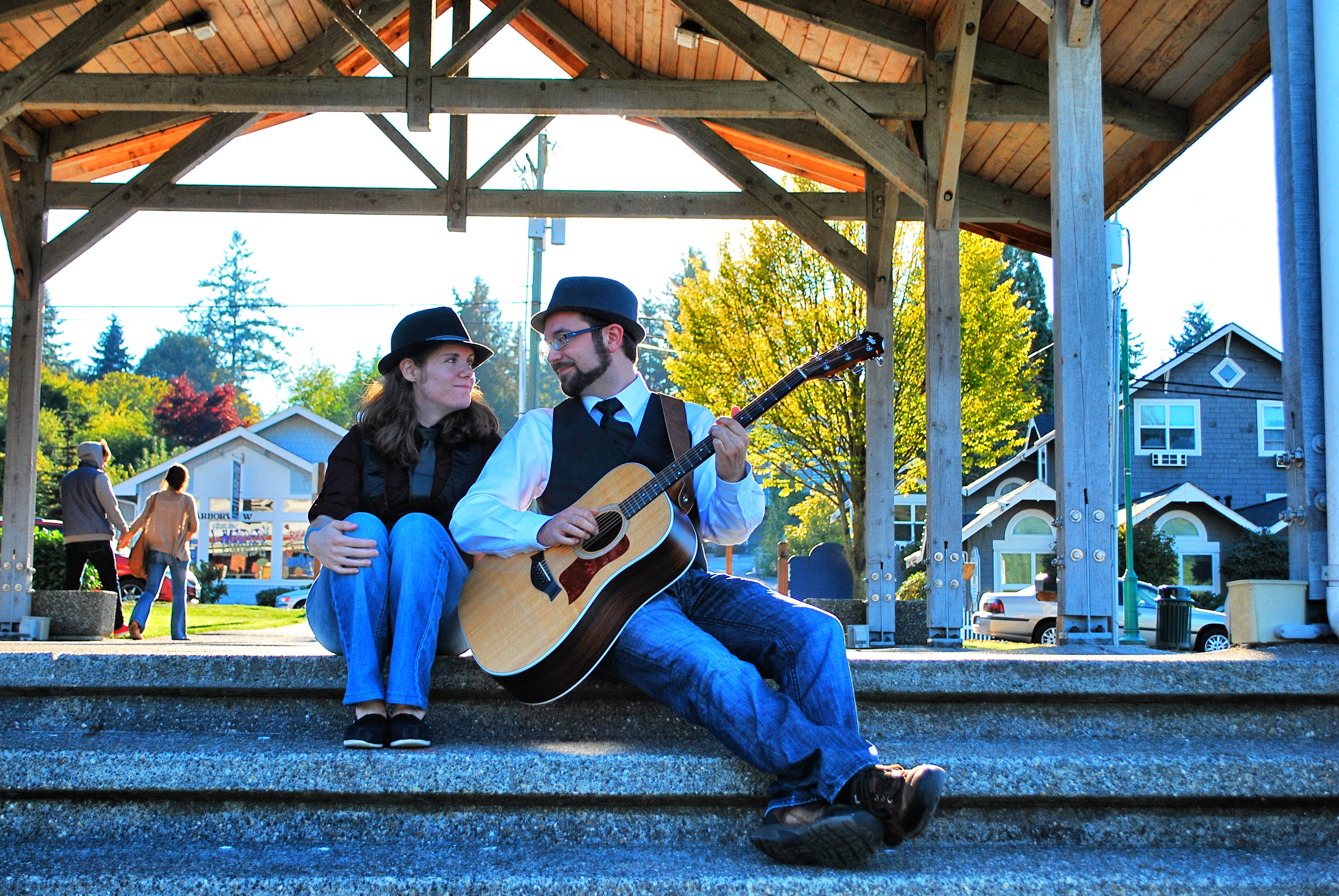 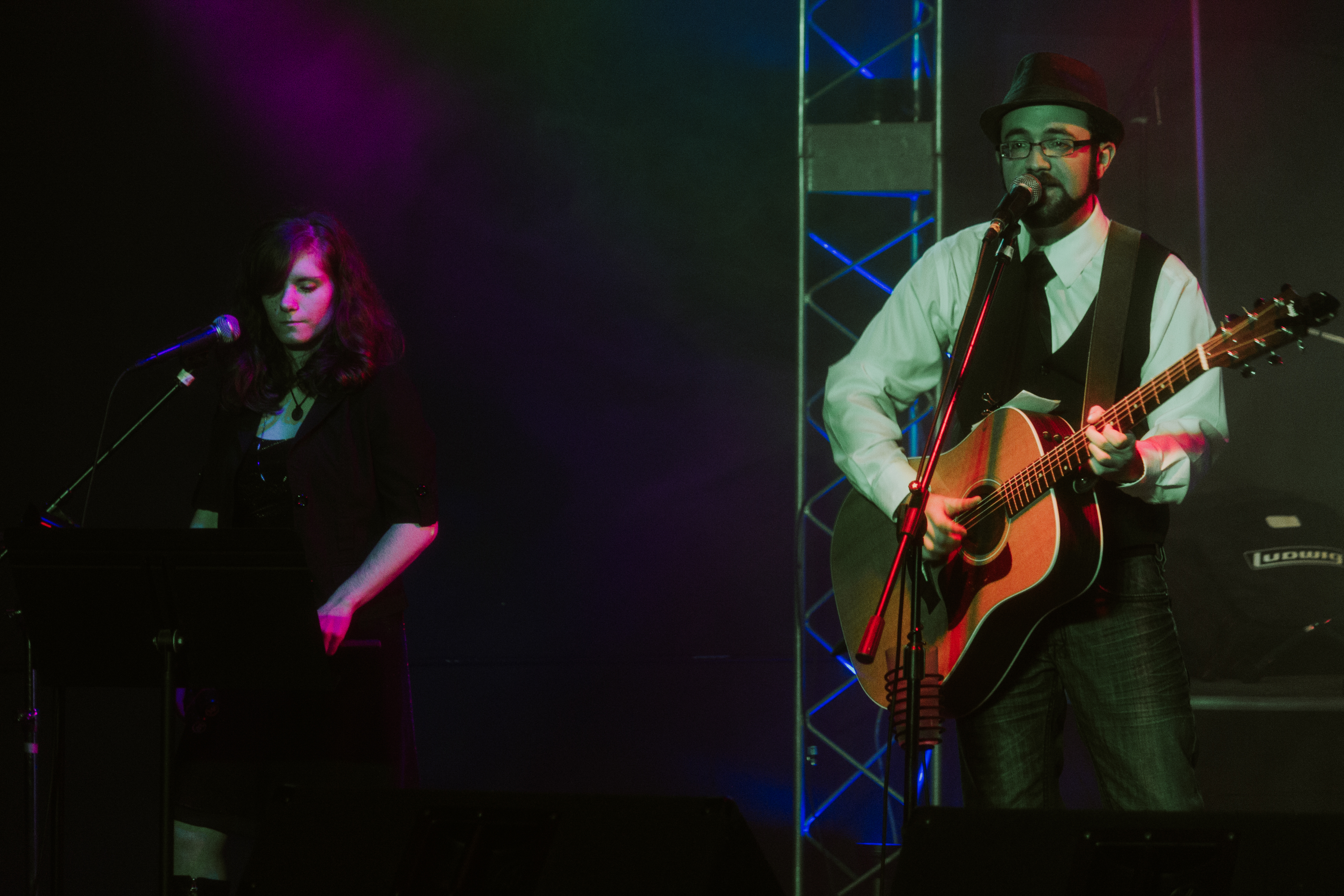 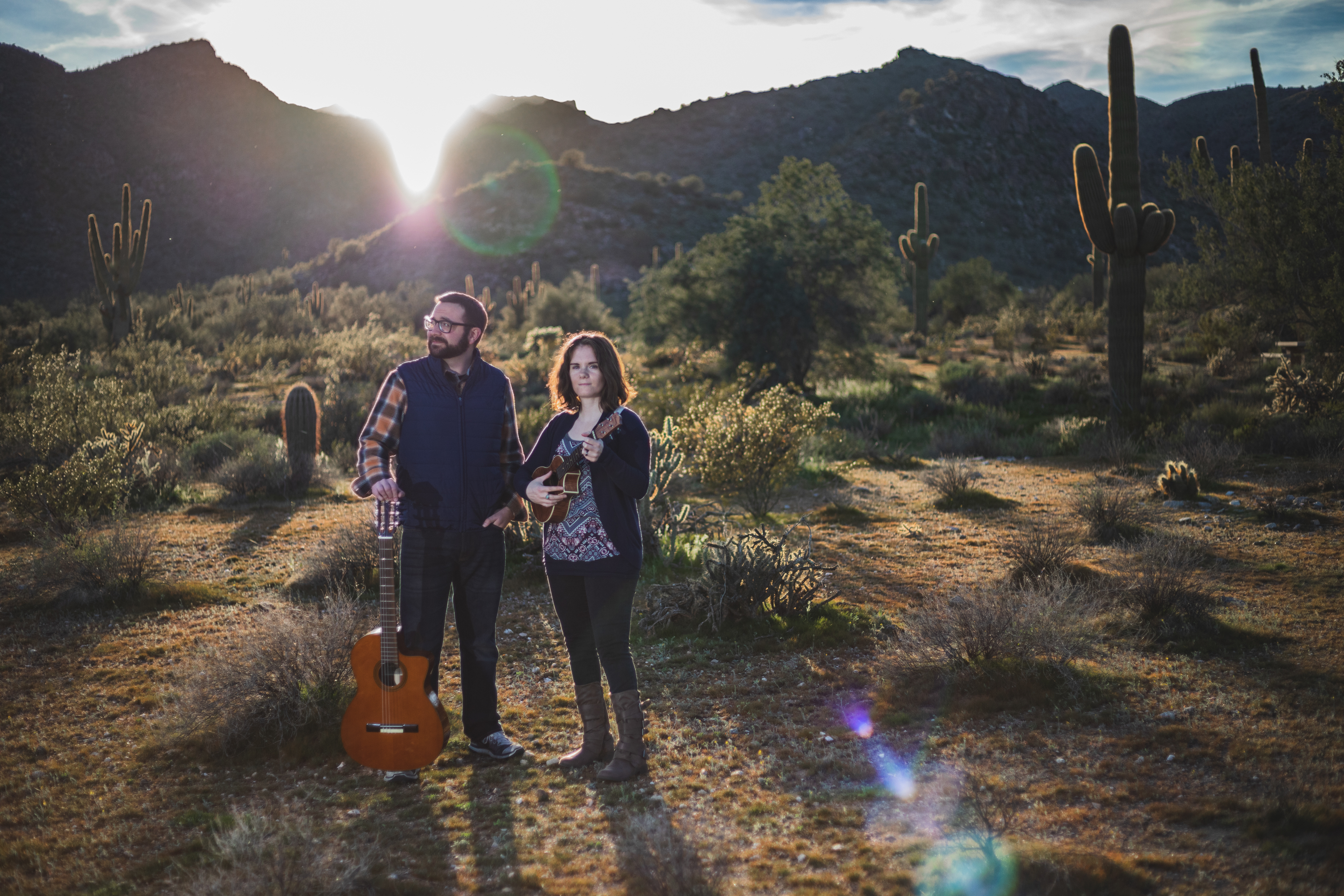 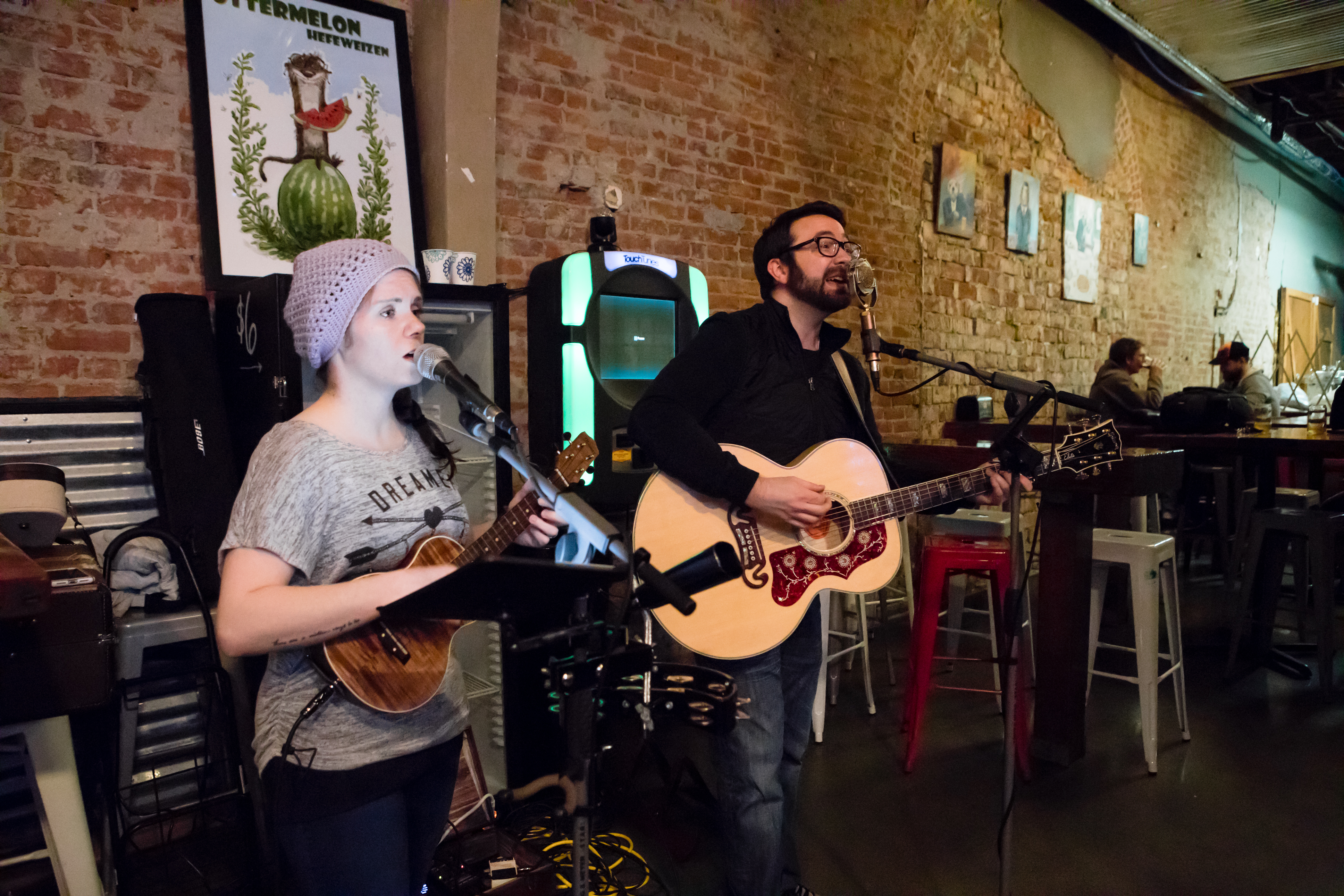