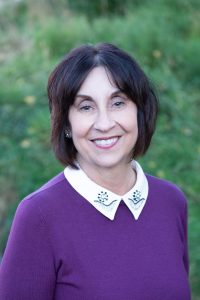 Today we’d like to introduce you to Diane DeLong.

Diane, we appreciate you taking the time to share your story with us today. Where does your story begin?
As a middle school student, Diane DeLong can recall the exact day she decided she wanted to major in journalism and how her high school teachers and Iowa State University professors mentored and inspired her along the way. For over 10 years, DeLong worked as a freelance journalist writing articles for newspapers and magazines, producing a documentary on women in Chicago, writing radio and TV spots, as well as designing newsletters for area nonprofits. Some of her most favorite projects were those that dealt with teen issues, in particular teen pregnancy. A serendipitous encounter with someone she knew in her community, ultimately led her to a perfect new career combining two things that she was most passionate about. DeLong says she was at the movie theater with her family when she ran into a woman who worked for Catholic Charities. They caught up briefly and she suggested DeLong apply for a position they had just received funding for – a teen pregnancy prevention program. “I assumed they were looking for someone with a social work background, but she laughed and said they had plenty of social workers but needed someone who could write, knows about public relations, and who could communicate and market this new program to the Prescott community,” she said.

For the past 25 years, DeLong has done just that as the Senior Program Manager of Catholic Charities’ North Star Youth Partnership program. North Star has grown from its roots in teen pregnancy prevention to targeted youth development programs ranging from leadership development and mentoring to special events designed to help teens develop a toolkit of life skills that promote confidence, connection, and leadership.

DeLong’s philosophy is that teens need to feel connected with their peers and adult role models. She knew from her own youth and raising three children, the best way to influence teens to make good choices is to bolster their self-esteem, provide them with leadership opportunities so they can experience the difference they can make, and have someone to encourage them along the way.
“I’m in awe of the youth that are in our programs. They have a strong sense of commitment to service and civic responsibility and care deeply for others, the environment, and the world at large. We support them through their struggles and let them know they don’t have to be defined by hardships or have their hardships derail them from becoming what they dream of,” DeLong said.
“EE Cummings once wrote, “It takes courage to grow up and become who you really are.” As a community, we all need to work together to help our young people flourish, find their strengths, and follow their own North Star, their sense of who they truly are. Their voice needs to be heard and we can help them find their path to success,” DeLong said.

I’m sure you wouldn’t say it’s been obstacle free, but so far would you say the journey have been a fairly smooth road?
My childhood was idyllic in many ways, growing up in a small Iowa town, surrounded by numerous aunts, uncles and cousins, family gatherings and enjoying our horses, dogs, cats, and the beautiful countryside we called home. On a summer day in June of 1964, our world was shattered when my brother drown in a neighborhood pond while fishing. Although he was an excellent swimmer, several unforeseen circumstances contributed to his death. He was 11 years old. Three years later, my father died of a heart attack at age 50, leaving my mother and I alone and grief stricken. My memories of that horrible time were of a strong, determined mother filled with faith and hope to make our lives as normal and as happy as possible. While struggling to make financial ends meet, we opened our home to college girls attending our local community college who soon became my big sisters. I was surrounded by adults, teachers and family that cared and continually showed me new opportunities, encouraged me to develop new skills and talents and not to be afraid of failing. My life was dominated by positive role models who expected me to succeed. The bar was raised high…not to achieve the impossible or reveal my shortcomings, but to let me know I could achieve anything, but only if I tried and believed in myself. I was not allowed to dwell on the negative, but to envision the possibilities. I learned looking back would only slow me down. By keeping that focus, I tried never to miss a new opportunity. Throughout my professional years, I’ve been called a youth advocate, a passionate crusader for teens, and a woman who gets things done with teens as my top priority. I am proud of all those descriptions and have so many people including staff, my supervisors, mentors, and like-minded community partners to thank. It truly takes a village!

Thanks for sharing that. So, maybe next you can tell us a bit more about your work?
After moving to Prescott, AZ in 1987 from the Chicago suburbs, Diane DeLong quickly became involved in several organizations and volunteer positions including public relations chairman, board member and advisory board member for Yavapai Big Brothers/Big Sisters, a member of the public relations committee and Convention and Visitor’s Bureau of the Prescott Chamber of Commerce, as well as on various committees and leadership positions at the Prescott United Methodist Church. She also did freelance writing for several communication projects and newsletters for area non-profits. In 1990, she proudly became a founding member of Prescott Area Leadership under the direction of Dr. Ron Barnes and served on the original steering committee. Since 1997, she has worked for Catholic Charities as Senior Program Manager of North Star Youth Partnership. North Star values all youth and empowers them to be healthy, self-assured, and involved in their communities. North Star engages youth through an array of youth development activities and educational programming including after school programs, youth leadership and service-learning opportunities, sports and recreation and special events in both Yavapai and Maricopa Counties. Diane co-founded Prescott’s Teen Maze in 1999, and Girls & Sports Day which is celebrating 20 years in 2022. North Star’s has served almost 350,000 Yavapai & Maricopa youth through its programming. She is co-author of the publication Build It and They Will Come, a guide to help communities plan and implement a Teen Maze/Fair and a chapter for Partners in Prevention: Whole School Approaches to Prevent Adolescent Pregnancy and STIs, a publication by the American School Health Association. Diane is a graduate of Iowa State University where she received a Bachelor of Science degree in Journalism and Mass Communications. She also completed the Nonprofit Management Institute Certificate in 2002 from Arizona State University and Yavapai College. In 2009, Diane was named Prescott Woman of the Year by Prescott Area Leadership. She is married to Bob DeLong, Principal R & D Engineer at Genesys Aerosystems and they are the proud parents of three children: Brynn, Manager of Corporate Operations, GAP Inc. in New York City; Nick who lives in Phoenix, AZ and is Acting General Manager at Banana Republic; and Haley, who lives in Santa Rosa, CA and is Project Manager at TRC Companies specializing in environmental consulting. In Diane’s spare time, she loves traveling to visit her children, walking with her dogs, and refinishing old furniture.

The prestigious ATHENA Leadership Award made its debut in the Prescott and Quad Cities in September 2020 as the teams at Quad Cities Business News and Prescott Woman Magazine joined forces to recognize the contributions, successes, and character of the region’s amazing women. DeLong was the recipient of this first Athena Award and said that it was such an honor.

“We live in a community filled with incredible women doing amazing things and I am constantly in awe of their accomplishments. I have been blessed to have many wonderful mentors throughout my life and career. Each one helping me achieve another milestone. I have also supported many women in achieving their goals and will continue to do so. I feel a great responsibility to support the women in our community and pay forward the same mentorship I have received from many wonderful women, many right here in our own community.”

“Living in the Prescott area provides so many wonderful opportunities to get involved, share your gifts, strengths and new ideas. Agencies, schools and non-profits work closely together to benefit others and ultimately make a positive impact on the entire community.”

Do you any memories from childhood that you can share with us?
When I reflect on my childhood, I am thankful that I can remember so many good things despite the tragedies my family endured. I have a photo of my Father and I at Old Faithful in Yellowstone National Park. I was six at the time and it’s a photo that was taken by my mother of the geyser erupting. She just happened to catch my father and I standing in front of her watching it as well. I remember feeling in awe of what I was seeing and that my father was standing next to me. It is the only family trip I remember us taking. It’s a special memory and one of only a few photos I have of the two of us together. The Prescott Daily Courier, in a Father’s Day story in 2018, ran the photo. I never would have imagined strangers seeing this special photo of me and my father that was taken so many years ago. 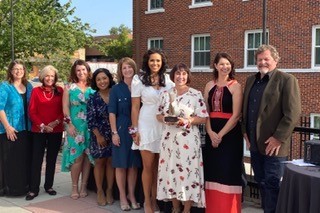 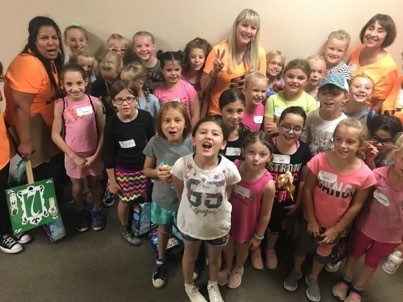 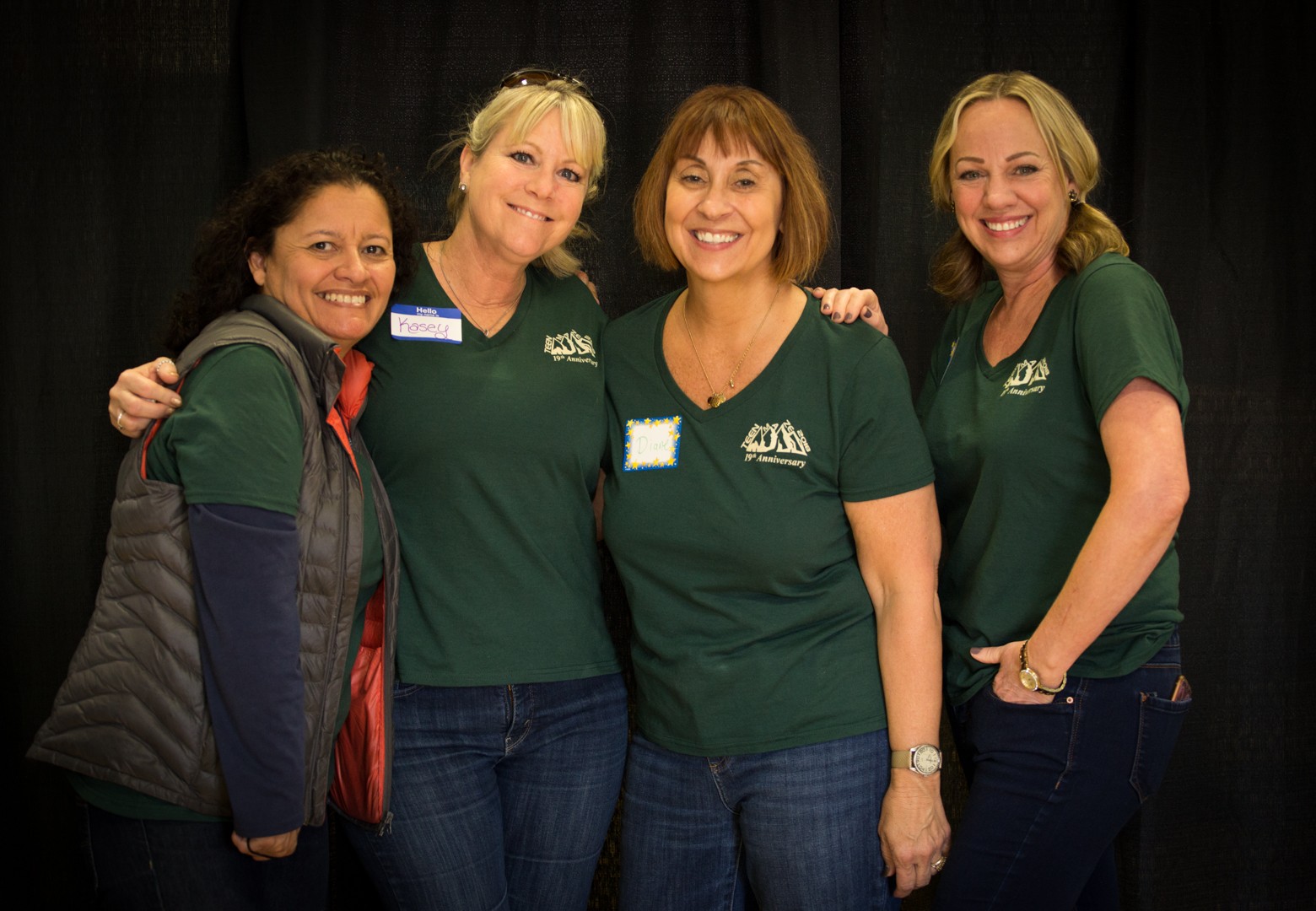