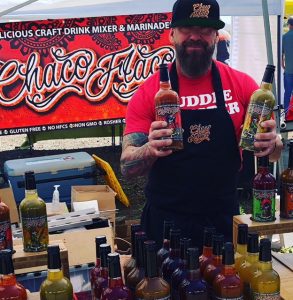 Today we’d like to introduce you to Chuck Moore.

So, before we jump into specific questions about the business, why don’t you give us some details about you and your story.
I had been a bartender and bar manager approaching twenty years. My many regulars at the bar had also become close friends, almost like family. I was having fun concocting, mixing and pleasing their pallets with whatever I could come up with in my head. I was pretty successful. However, I was less than enthusiastic about what I was actually serving the crowds. I knew the ingredients of what was in each mixer. High fructose corn syrup, artificial sweeteners, preservatives, sodium in exorbitant amounts, chemical-laden ingredients and so on. At home, I had been juicing with fresh vegetables, fruits, spices, and flavors for years. One day, the perverbial light came on. I began mixing and blending and muttleing. I decided I would create something healthy, low calorie, low sugar that naturally bursts with flavor and serve this kind of drink to the masses. The first mix to come of my experimenting was… the OJ Margarhita aka Señor Flaco. Graciously, the bar I managed allowed me to bring him in and test him out on the local patrons. I bottled him up in milk jugs and gave it a whirl. One night, there happened to be three sorority sisters sitting at the bar ordering one after another of my Margarhita concoction. A man sitting close by had been watching and asked me what it was they were guzzling. I gave him the details and made him a drink. He took a couple sips and asked if I wanted to bottle it up and put it on the market for resale. What do I call it he asked. I thought for two seconds and blurted out Chaco Flaco. I had the nick name of Chaco since my early twenties and I take great pride in that my mixers are “skinny” which is flaco in Spanish. Out of my kitchen Chaco Flaco mixers were born.

We’re always bombarded by how great it is to pursue your passion, etc. – but we’ve spoken with enough people to know that it’s not always easy. Overall, would you say things have been easy for you?
I had to get back into the kitchen immediately. I had to find acceptable packaging. I had to create labels. I had to find a distributor. I had to raise money and yes, raise more money. Ideas flooded my mind as I had to become a businessman as well as the creator. I had to become a quick study of manufacturing, freight line, VOLs, and finding the right VRBO while on the road. Not an easy or inexpensive thing to do on the fly. I relied on word of mouth when it came to the vendors I used. Seeing my struggles, my longtime friend and fellow mixologist, Adam VanSlyke, offered his assistance in the kitchen. Between the two of us, we nailed the recipe piece. It’s been almost 6 long years of nose to the grind. I’ve researched business plans, studied every successful beverage businesses journey, and followed the leaders in the industry. I have been fortunate enough to have added several key members to the team. Chaco Flaco is in a position now where we are getting inundated with opportunities. Some of the more hip ideas we’ve been approached with are sponsoring pro-sports teams, appearances on hit cable TV shows, not to mention entering several national retail grocery store chains. All of this growth sounds like a pipedream coming true but as every self-employed business owner knows, it’s one heck of a struggle. We are now faced with correcting some of the mistakes made in the beginning. I have lived and learned for sure. The biggest challenge has by far been raising the capital to grow.

So let’s switch gears a bit and go into the Chaco Flaco Drinks story. Tell us more about the business.
Together, our team at Chaco Flaco has created what we’ve been told is the best tasting line of drink mixers on the market. Our point of pride is that our mixers are all natural, gluten free, non-GMO, Kosher, dairy free, and contain no HFCs. Each one is low calorie, low sodium, and low carb and uses only natural sugars. We proudly introduced to the world the OG Margarita, the 4 berry mint cucumber Mojito, the Forbidden Horchata, Dr. Skin and Bones Pina Colada, the Strawberry Bandita, Bloody Maria and her sister with an attitude Verde Maria (one of the first ever bottled green bloody mary), We worked our butts off on the business side of matters starting off at local farmer’s markets. Chaco Flaco was able to get itself onto the shelves of several Whole Foods, AJ’s and Bashes grocery stores around the valley. When Harkins Theatres opened up there in theater bars the band of Chaco Flaco spirits made it on the menu. We’ve done 60 plus roadshows in Costco’s and Sam’s Clubs over the entire Southwest region. I’ve had help from family and friends along the way who have now become know as the Skeleton Crew. We have even created Chaco Flaco TV which is a YouTube series of shows where I bartend and our chef cooks with recipes created out of our mixers. Did I mention that all of our mixers have double lives as cooking marinades? It’s true. They are so clean that you feel good about using them in countless recipes even the kids can eat and drink. Each bottle has two drink recipes and a marinade recipe on the label. We are constantly creating and experimenting in the kitchen. Our customers love the face to face interaction we have when doing the roadshows and they are so eager to share recipes they have tried at home.

Has luck played a meaningful role in your life and business?
That’s funny. I don’t believe luck has had much to do with Chaco Flaco. I was blessed with a couple of gifts that have proven essential in creating an unusually delicious line of products and helped on the business side as well. But what truly has been the secret to my success is patience, perseverance, and faith. It’s what keeps my feet moving both in business and in life. There is still an incredible amount of work to be done and plethora of venues we have yet to tap into but with introduction of two new line extensions to be released in the 4th quarter of this year and early 2019 and the scheduled 200 plus roadshows in Costco and Sams Clubs blanketing the US, the entire Skeleton Crew is geared up and ready to rock. None of our success would have been possible without the grit of the Skeleton Crew which is made up of Ricky Rodriquez, Steve Cislaw, Adam VanSlyke, Sharron Hayward, Chris Gibbs, Chris McDonald, Dave and Rachel Brimley, Mike Hill, Adam Allison, David Marhoffer, Millie Montgomery, Darcy Moore, Tommy Roberts, Darci Passarella and a special thanks to Steve and Wilma Cuevas our national sales team. 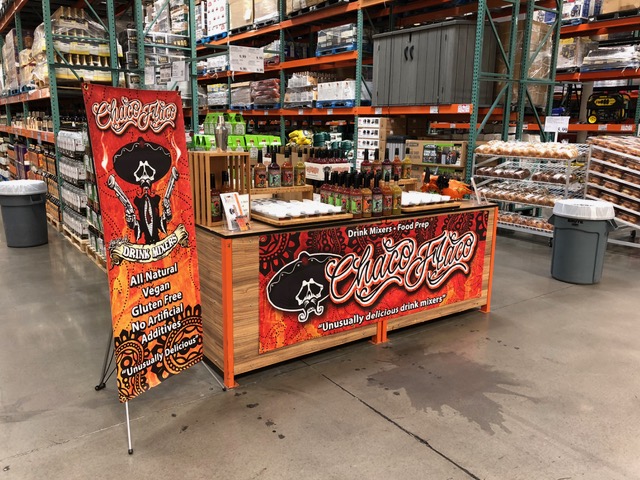 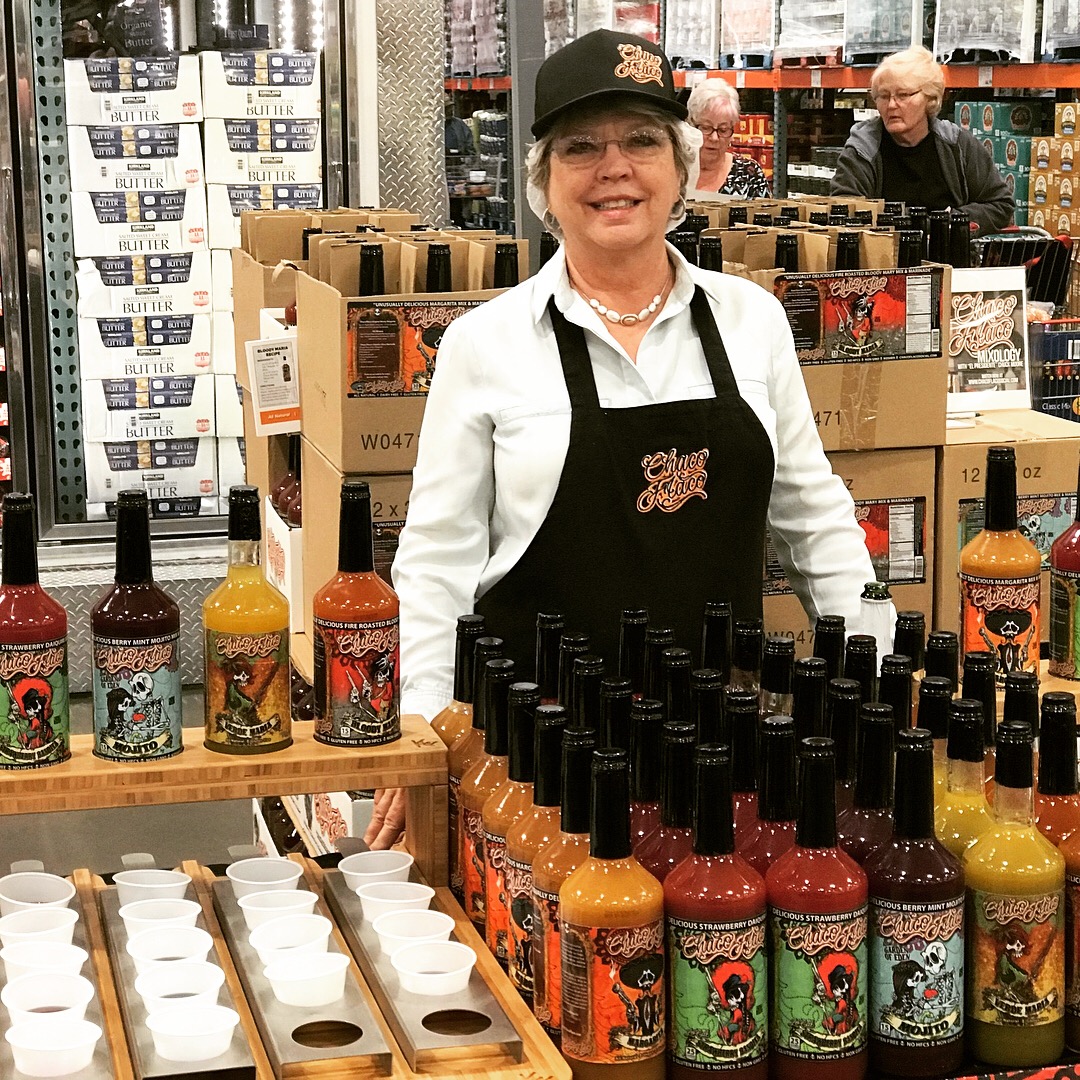 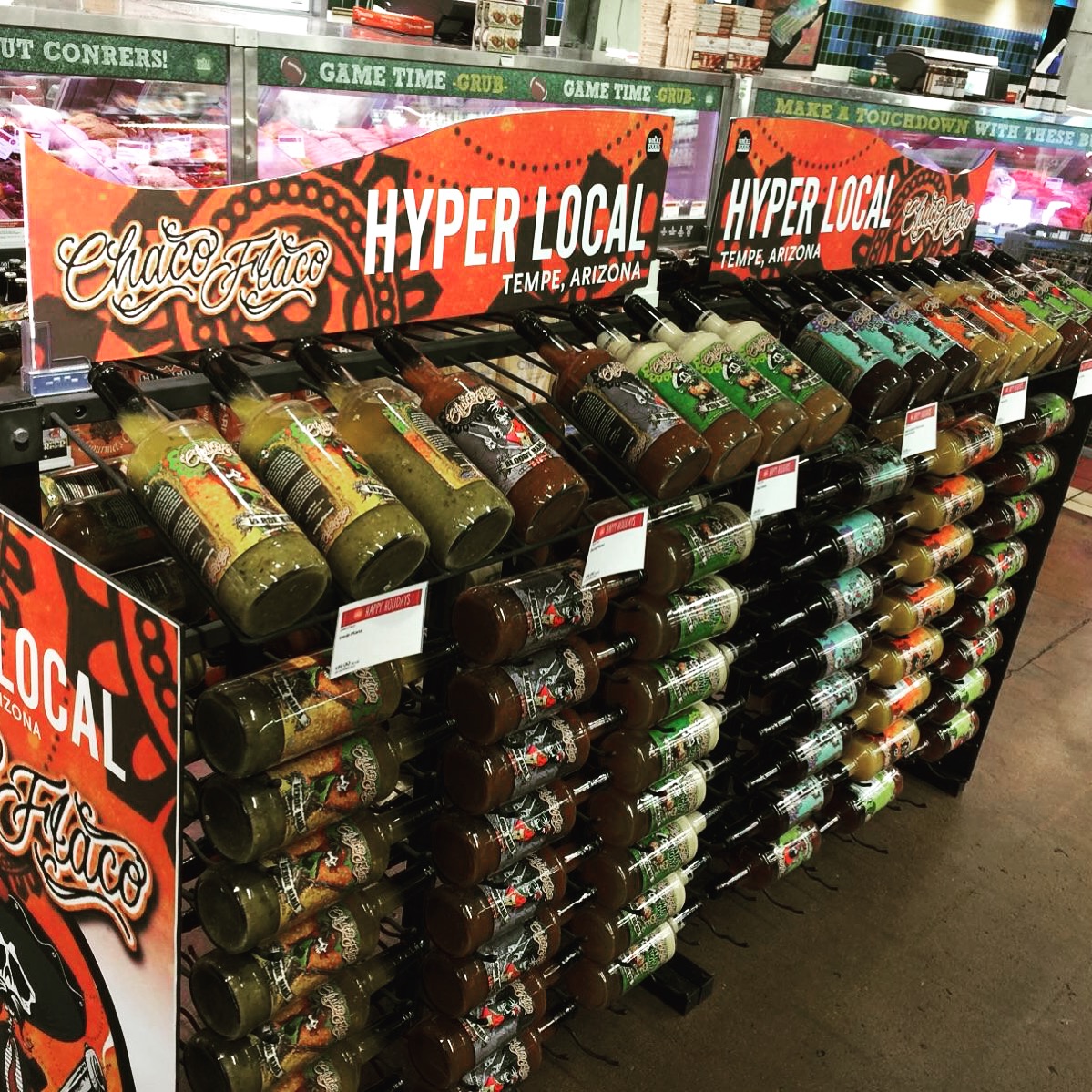 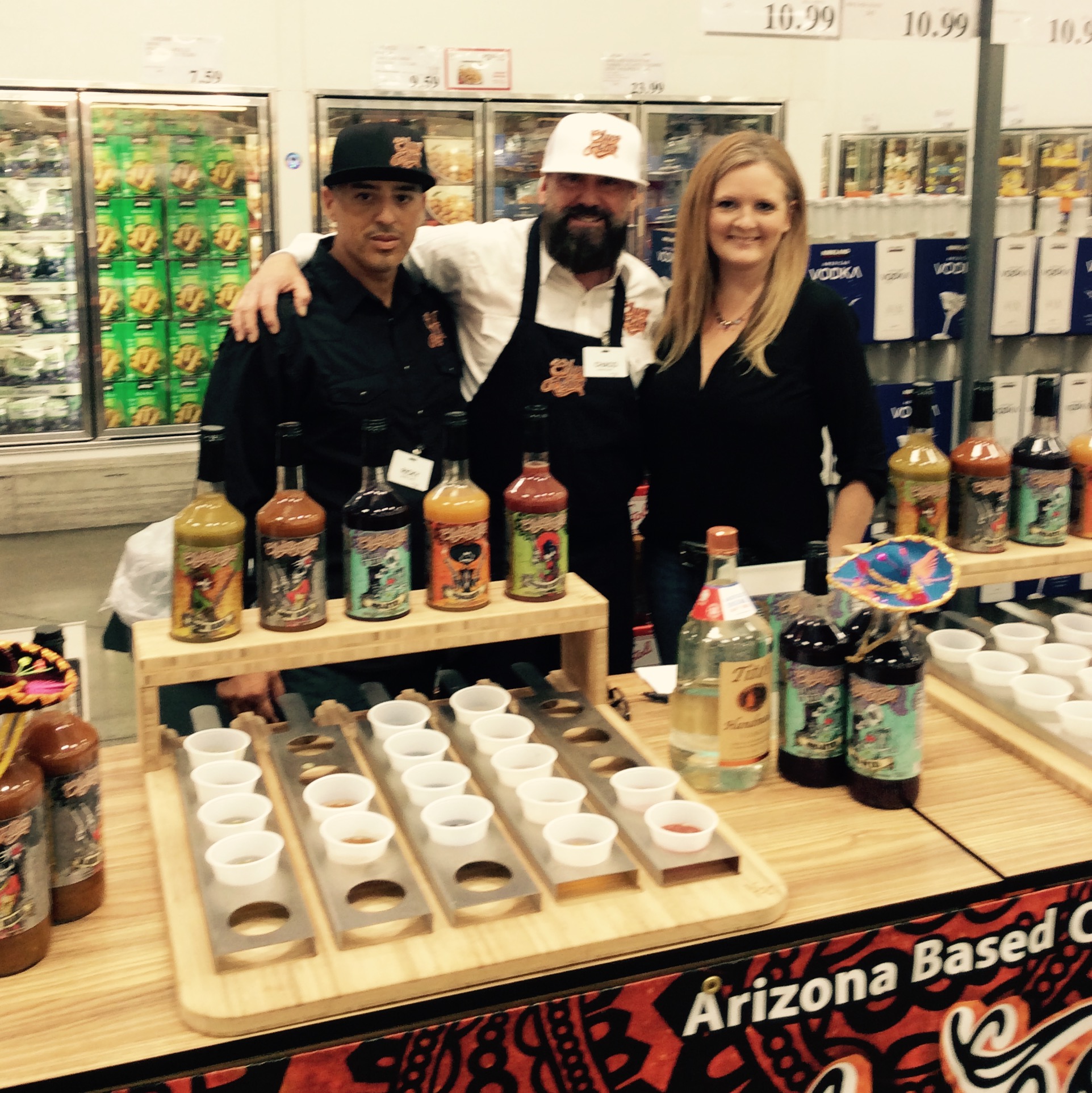 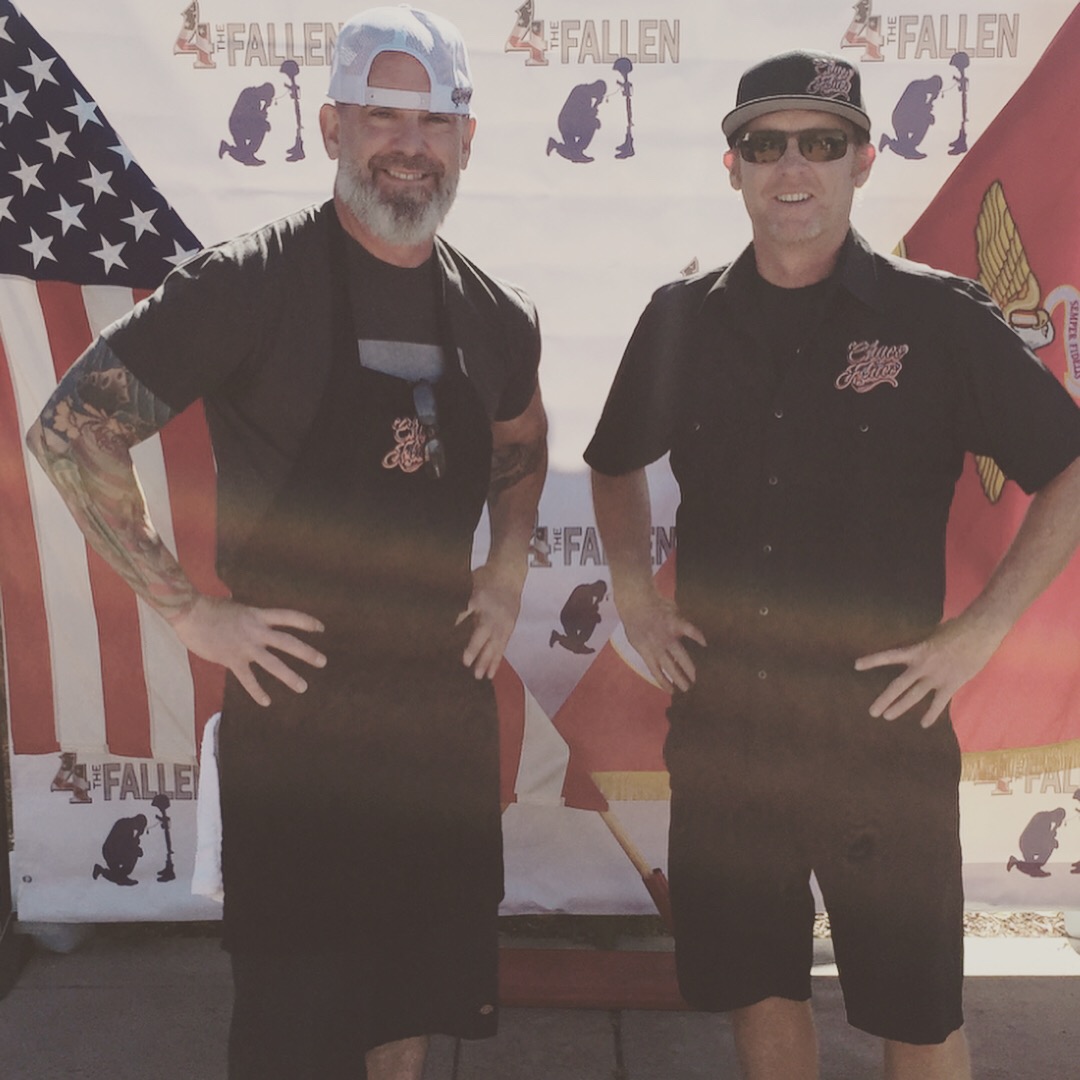