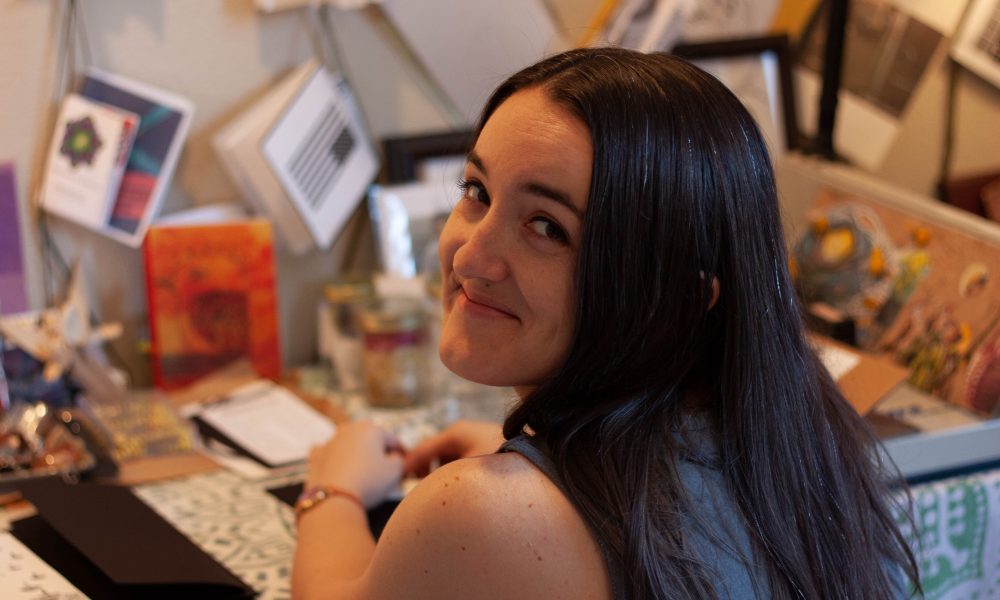 Today we’d like to introduce you to Sophia McGovern.

Hi Sophia, we’re thrilled to have a chance to learn your story today. So, before we get into specifics, maybe you can briefly walk us through how you got to where you are today?
My journey to publication began as a child. I collected bits of reusable materials, like pretty wrapping paper, experimented with textures, and even tried unsuccessfully to sew my own books. In college, Rosemarie Dombrowski, the Phoenix Poet Laureate, became my mentor. She introduced me to independent publishing, and I became an assistant editor for a few local presses including Write on, Downtown, Rinky Dink Press, and Four Chambers Press.

Later, I joined Cardboard House Press’s Cartonera Collective. This group gathers weekly to make cardboard books featuring Spanish-speaking authors alongside English translations. This revolutionary publication deconstructs the canon while reusing materials that would otherwise become waste. These bilingual books became portals to other worlds of literature and community, and the weekly meetings were a source of healing.

I wanted to extend this artform to smaller pieces of writing. These literary morsels may only take a minute or two to read, but they can linger with you for much longer. This is my focus with Little Somethings Press. To this end, I began collecting cardboard and put out a call for prose under 300 words and poems up to twelve lines. Submissions poured in from around the world. For the first issue of Little Somethings Press, I published thirty authors and ten pieces of art, which became the model for each issue.

Back then, I made books on the floor of our living room, letting nature documentaries or cartoons backdrop the hours of cutting cardboard, sewing pages, and gluing covers. Today, I have a maker’s space filled with the tools of the trade, including a commercial-grade printer and book guillotine. To date, Little Somethings Press has produced more than 300 books by hand, published over 100 creatives from around the world, and held three book launches.

As the footprint of Little Somethings Press grew, a new editor joined the team, Isabella Ferrero, currently an undergraduate English Major at Northern Arizona University. On October 2nd, all three editions of Little Somethings Press will be virtually featured in the Albuquerque Zine Fest. Slowly but surely, we are making our way back into the world.

I’m sure you wouldn’t say it’s been obstacle free, but so far would you say the journey have been a fairly smooth road?
Work in independent publishing is a labor of love. However, the positive response to Little Somethings Press makes all the work worthwhile. To give readers an idea, after the pieces are selected and edited, the book itself must be designed, painstakingly assembled by hand, and then lovingly schlepped to our local Post Office. From there, the fun part of planning the launch begins.

Before the pandemic, Palabras Bilingual Bookstore hosted our events. However, as the world shut down, literary projects felt less important. As the submissions poured in though, it was clear that art was a form of survival. During trying times, people need little books more than ever. We made the switch to virtual events, which went more or less as planned. Despite the physical distance, the beauty of seeing people from around the country share their stories and support their loved ones brought us closer. The outpouring of support led to all three editions selling out multiple times, enabling Little Somethings Press to keep on booking!

Thanks – so what else should our readers know about your work and what you’re currently focused on?
My areas of speciality are education and creative writing. I am an English Language Arts teacher at an alternative high school in Tempe, Arizona. My road to education was paved with literary events and global health work. While in college, writing helped me find myself, and now as a teacher, I strive to create a space where my students can likewise explore and express themselves.

Teaching, writing, and creating are artforms that feed one another, so I am very fortunate. Zines and handmade books find their way into my curriculum and the energy from the classroom fuels my efforts in the literary world. It is a constant reminder that if I believe in others’ voices, I need to continue to listen and share space.

How do you think about happiness?
Books, pets, tea, and the outdoors are all things that bring me joy. Books have always transported me to other worlds. When I was a kid, I spent my summers with my nose buried in a book. Now, I discuss themes of literature with my classes, and see kids connect and empathize, which is pretty special. Of course, watching scraps of paper transform into books through the power of my own hands is its own sort of magic as well. As for the other things that make me happy, they all somehow make books even better: cuddles with a pet, a warm cup of tea, and a view of the wilderness filtered through a tent flap. 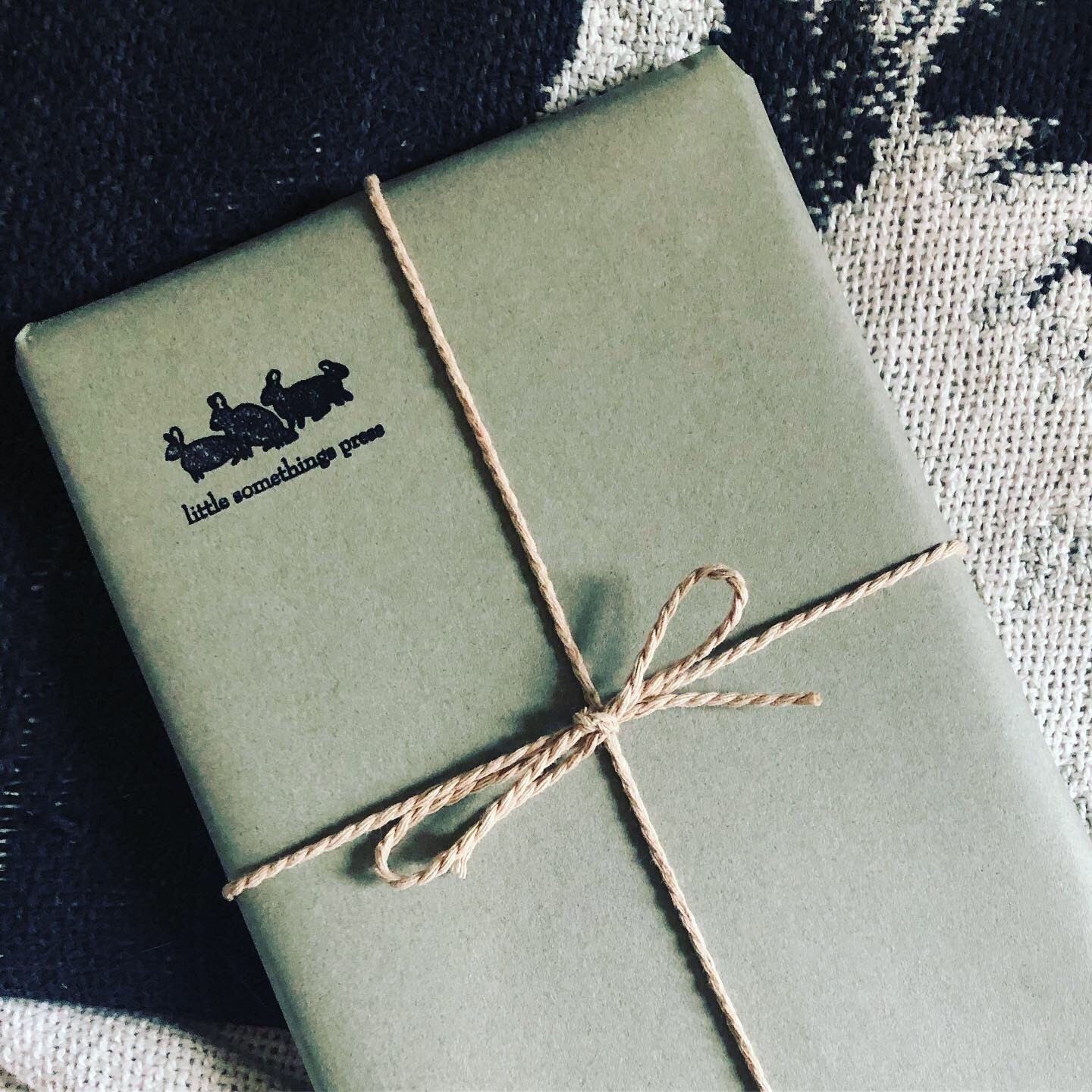 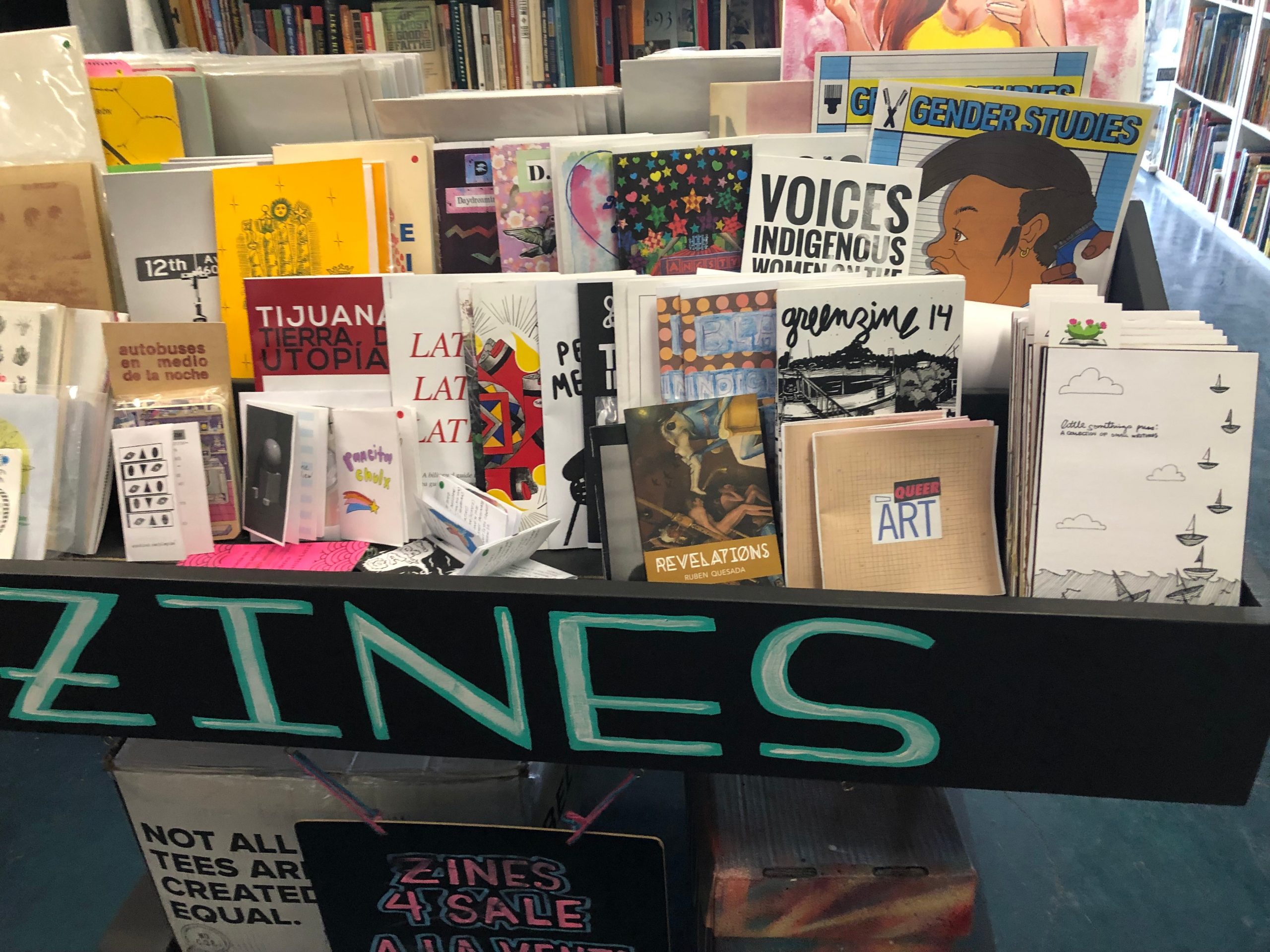 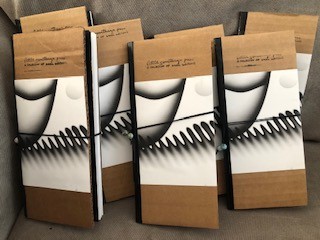 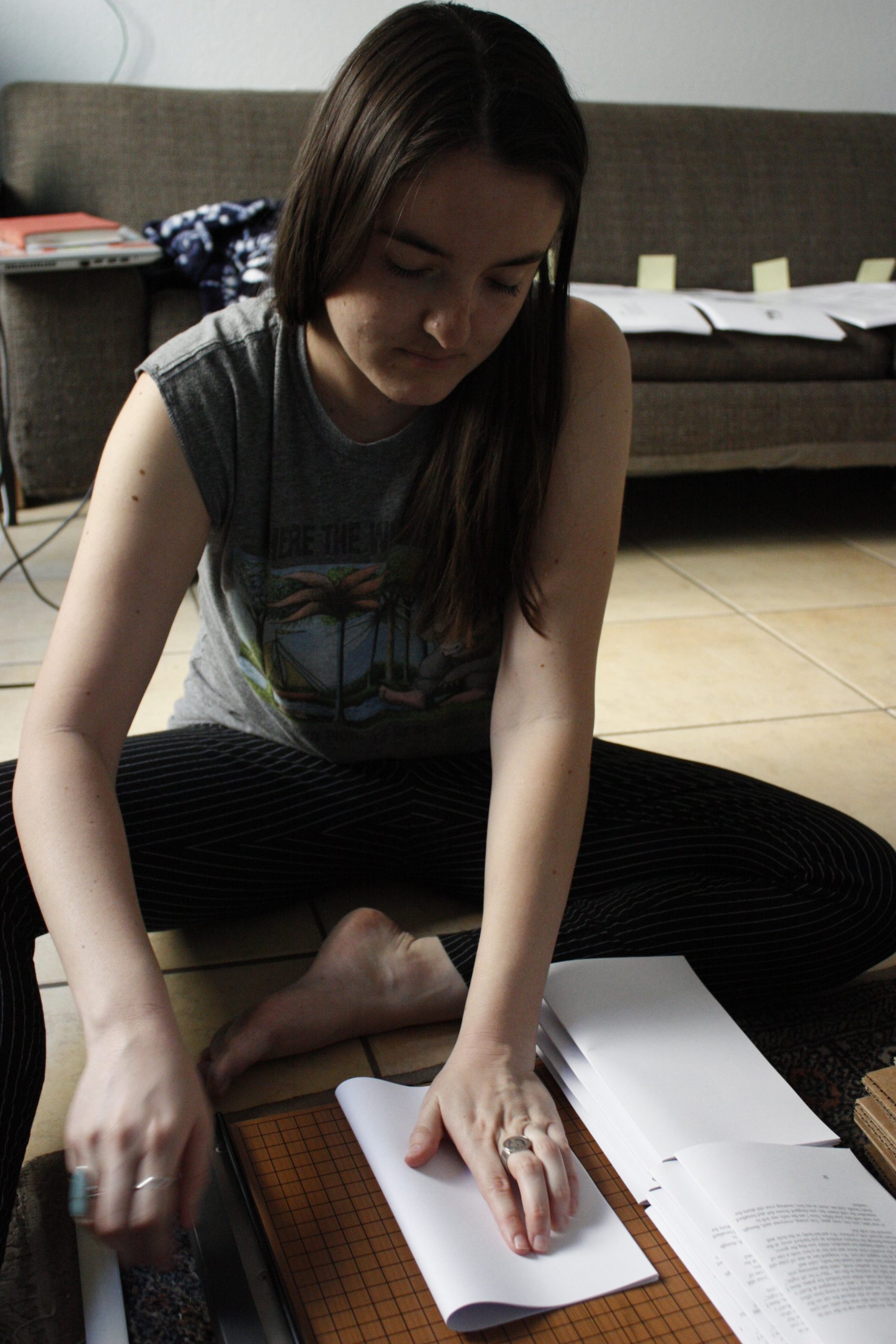 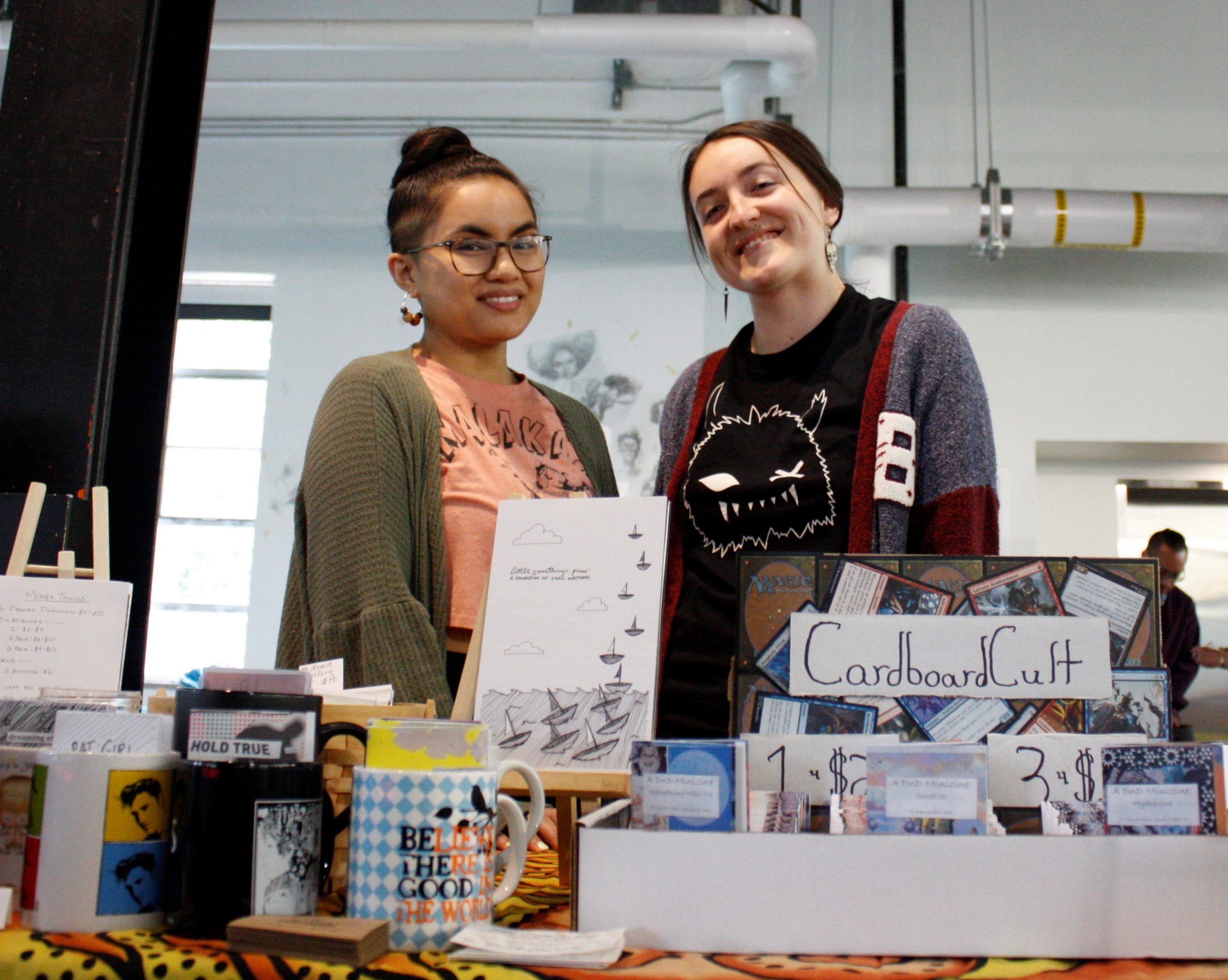 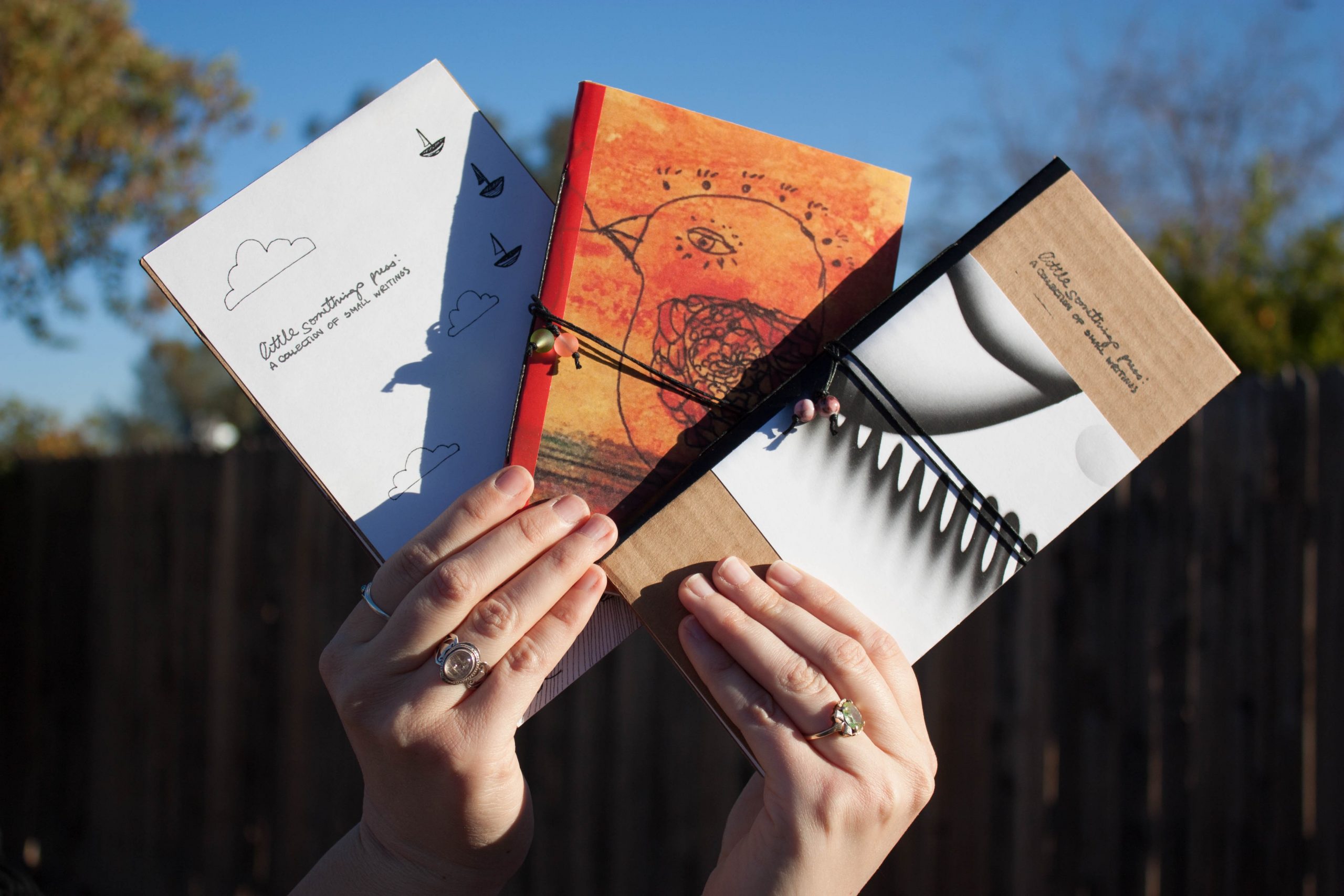 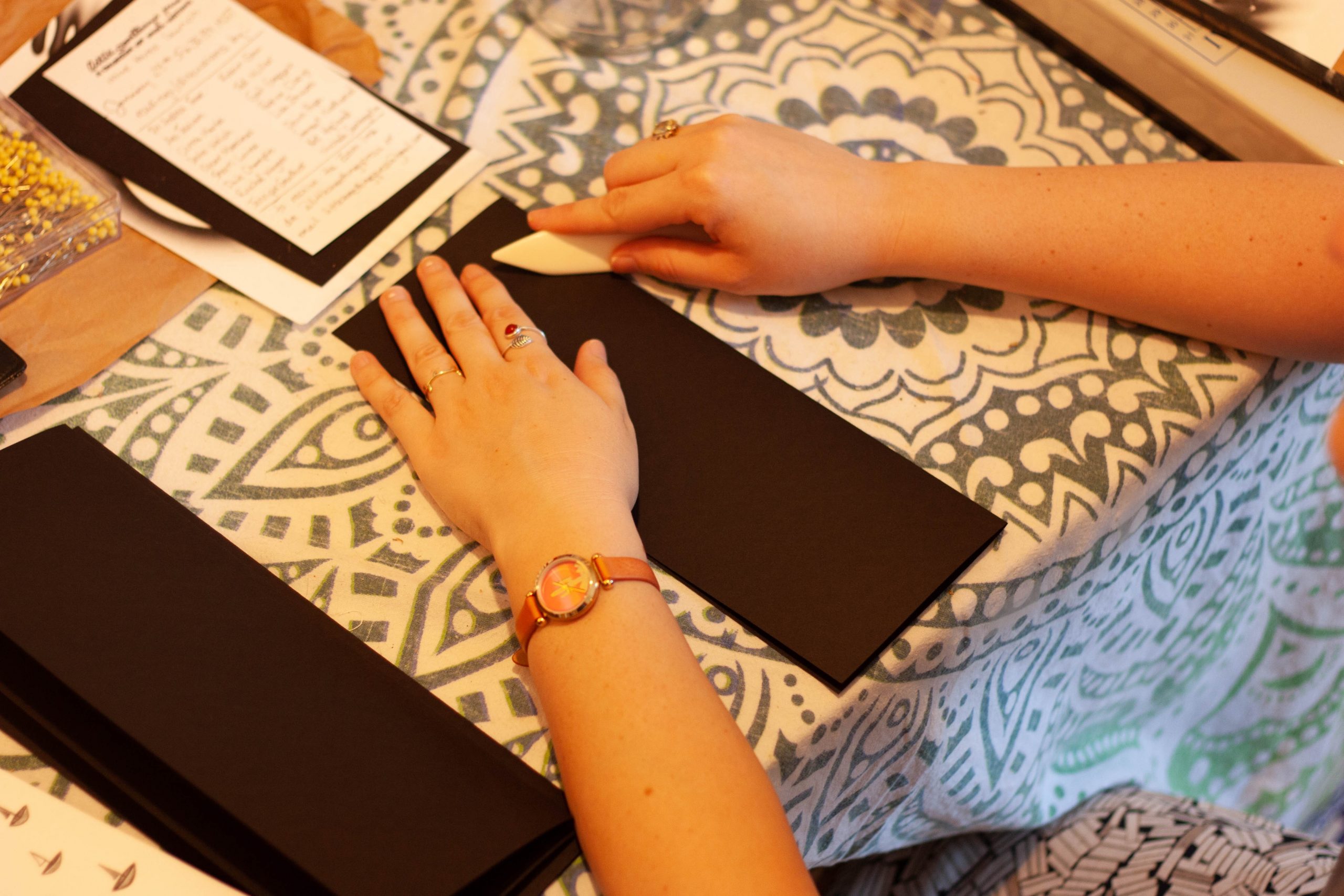