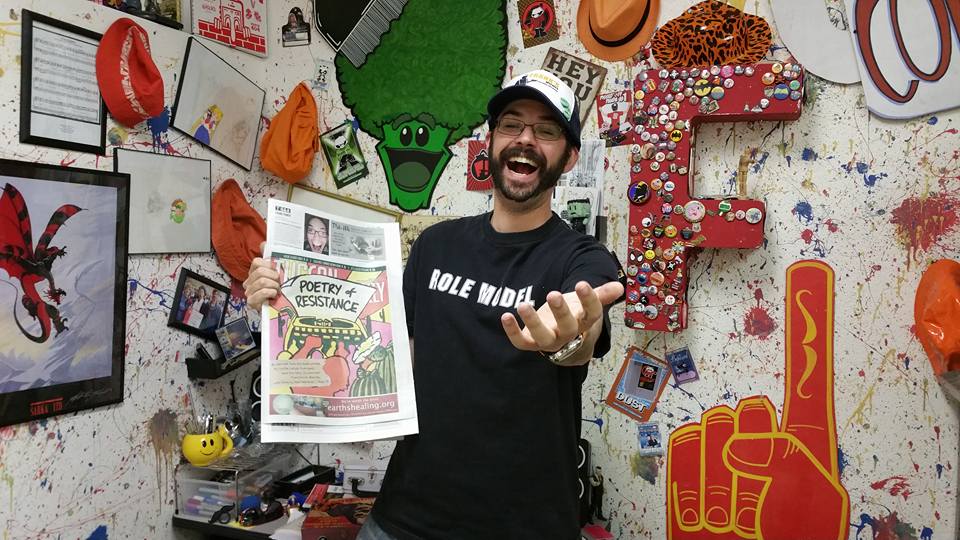 Today we’d like to introduce you to Frank Powers.

Frank, we’d love to hear your story and how you got to where you are today both personally and as an artist.
I’m your BF! F- Your Best FRANK Forever, FRANK Powers and yes, that is my real name. I grew up in New York on Long Island! Woo Woo Woo. I even lived in New York City for a bit while getting a degree in Cartooning & Illustration. I’ve known I’ve wanted to be a cartoonist since 2nd grade. Soon after graduating college, I moved to Tucson, Arizona and got a job in the trenches at the greatest diner currently in Hell and formerly the greatest diner in all of Arizona, GRILL! I made all of my friends in Tucson at that amazing dive.

These past few years, I’ve been finding new ways to express myself, push my creative ideas, and actually EXECUTE them. I began doing more performance-based art and cosplaying original characters I would create for Hosting, Emceeing, Stand-up, and even some Acting. I recently got a Master’s degree in Motion Art and began my broadcasting career hosting a weekly radio show called Laughter Hours with FRANK! Powers on 99.1fm Saturdays from 9 to 11 pm (you can listen anywhere on downtownradio.org). I’m also a DJ at Rock 102.1 KFMA – Tucson’s Rock Station. It’s just the beginning of a shift from a from a visual art career toward an entertainment career.

We’d love to hear more about your art. What do you do you do and why and what do you hope others will take away from your work?
I created independent comics for years with my cartoon character Pissed ØFF Panda. He Hates everything. I am finally collecting every PØP comic & story into a hardcover collection because performing arts have taken all my attention in the last 2 years. In the wake of the world we’re living in, I bring a message of positivity to all the things I do. PMA all day! PMA (Positive Mental Attitude) was a decision I made about my everyday mindset to not be such a Pissed ØFF Panda myself and embrace my very real ability to be this unwavering optimist. I’m often told I should be a life coach!

I have found I like to shine a spotlight on creative people. I started an award show for local artists, hosted a local late-night talk show for artists, and I opened an art gallery for cartooning and comic art called Constant Con: The Comic Con that goes on and on… until it didn’t. But that failure turned into a small business pivot to go from Constant Con to the Comic Bookmobile! It’s a comic library on wheels that travels Arizona and lets me teach kids how to not only create original characters but to be original characters themselves. I want to be the guy that shows kids it’s not only ok to be different, it’s BETTER to be different. Way better.

Do current events, local or global, affect your work and what you are focused on?
I don’t think the role of artists has changed at all. It’s always been arts job to point out something absurd or capture something beautiful. Art adds commentary and creates controversy. It’s there to capture a moment in time. Art is meant to express feeling from the artist and pull feeling from the viewer. It’s communication. It can be shared with the world, yet remain personal. Art can work as a symbol. It can stand for something, and it can be just plain fun entertainment. I like to combine the latter two. A lot of fun with a bit of message because I believe laughter is still the best medicine and I believe I can heal some hearts. Really, I do.

So, this Comic Bookmobile endeavor… it was a direct retaliation to Sandy Hook and the rising violence in community settings we would see nationally at nightclubs, movie theaters, concerts, and even Kindergartens. It’s all too sad. People shouldn’t be terrified of the world, but the world is less naive than ever and scary at times. We need new perspectives on how to digest the onslaught of information we see every day and combat the newer problems we see in our social situations. Bullying, suicide, and the rising awareness of how dangerous depression can truly be are becoming more prevalent. So, I put on a funny suit and cape to fight back and fight hard for something good. JUST LIKE THE BATMAN! I feel the Comic Bookmobile will help take that fight further. I know I can make an inspirational impact and a memory that will last a lifetime.
Crazy, right?

Do you have any events or exhibitions coming up? Where would one go to see more of your work? How can people support you and your artwork?
You can search FRANKENSTYLIN and that’s me on every social thing. Just tell google NOOOOO you did NOT mean Frankenstein. Geez… that freakin’ guy. Truly, The Comic Bookmobile is my greatest creative endeavor. After getting my Master’s degree, I joined Tucson’s Startup Community to get new ideas on how to save my small business. After a 17-week course, there was a pitch competition for my Mobile concept. 18 other companies versus Me (with my business partner Natalia Lopez. HI TALIA!)… AND WE WON! We won the Startup Tucson Thryve Competition and all that effort proved a lot to me and some important people in Tucson.

Since then, we’ve met with the Superintendent of Pima County schools and he believes in the vision I have. He described seeing how differently kids behave now compared to 17 years ago when he began. Especially creatively. So, we started to raise money for an actual vehicle for the Comic Bookmobile and that is the best way to support my art and creativity for Arizona schools. You can watch our winning pitch video and the winning moment at www.Gofundme.com/BusBusBus. Comedy Gold. 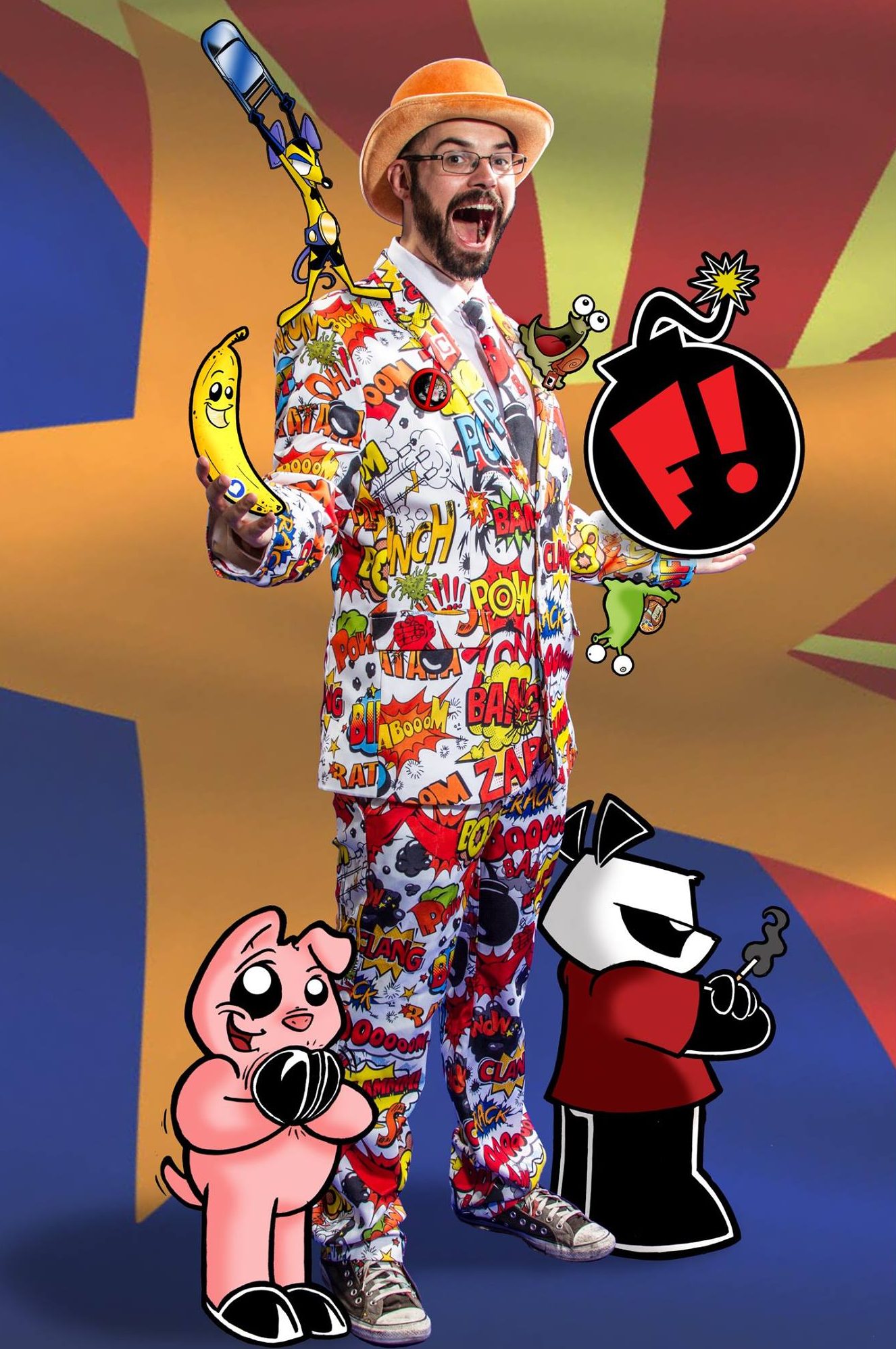 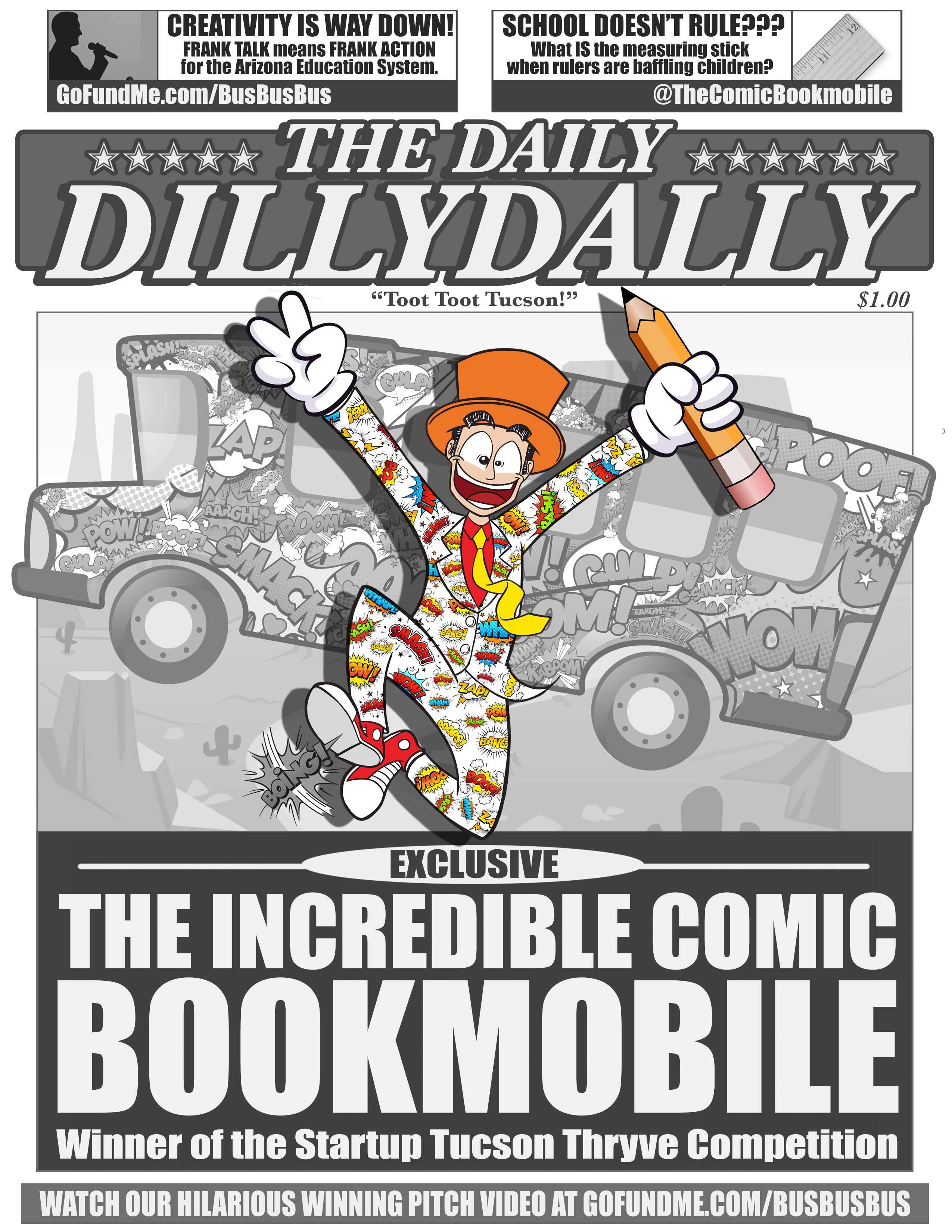 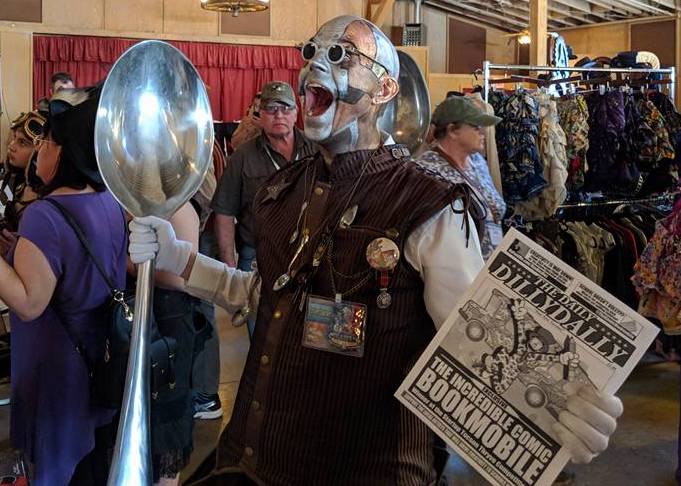 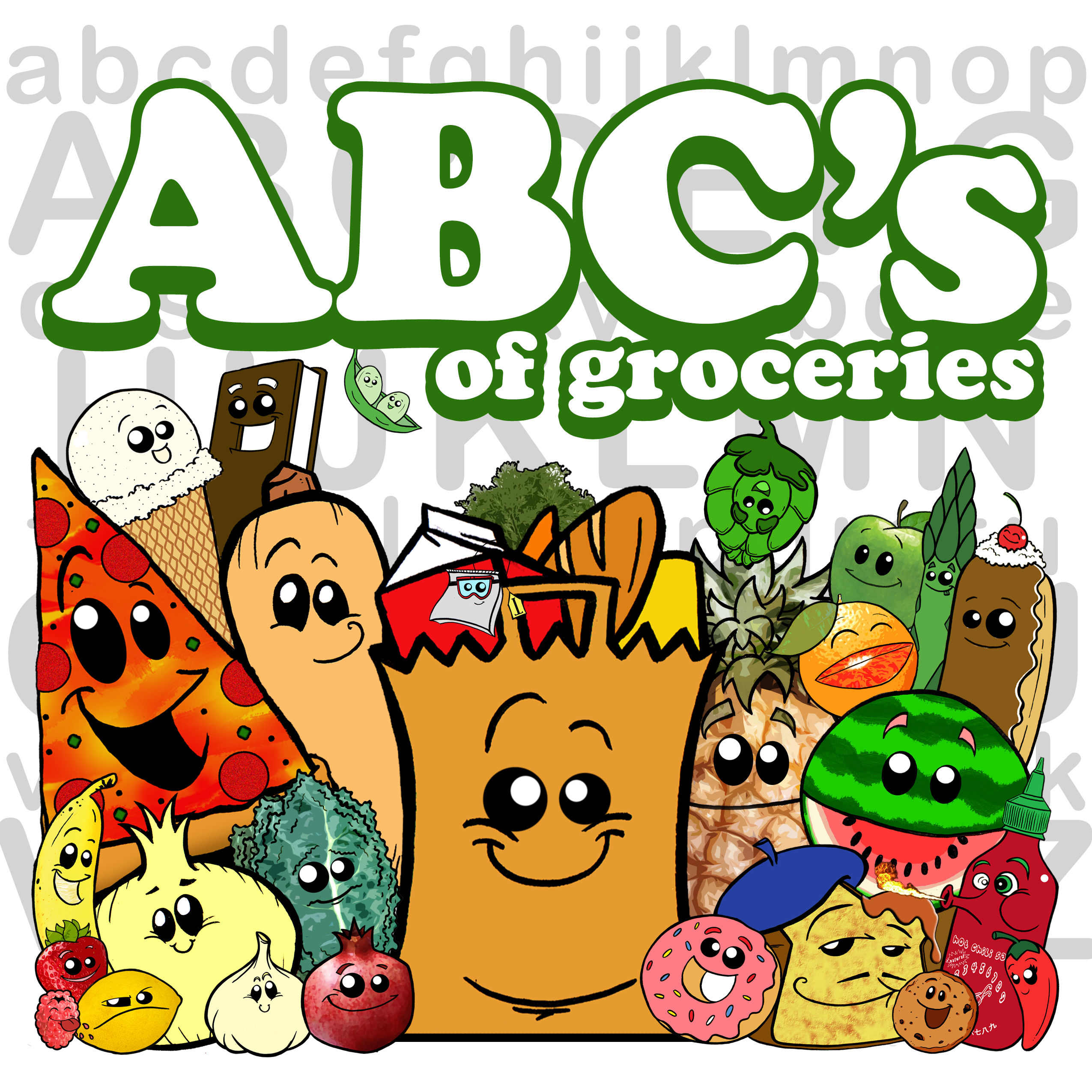 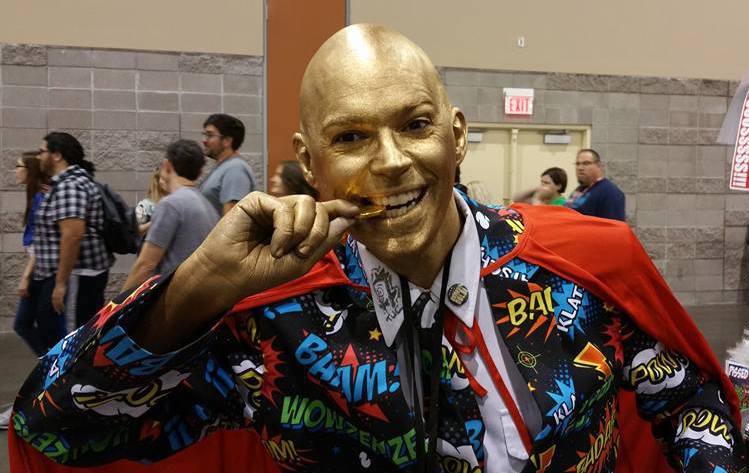 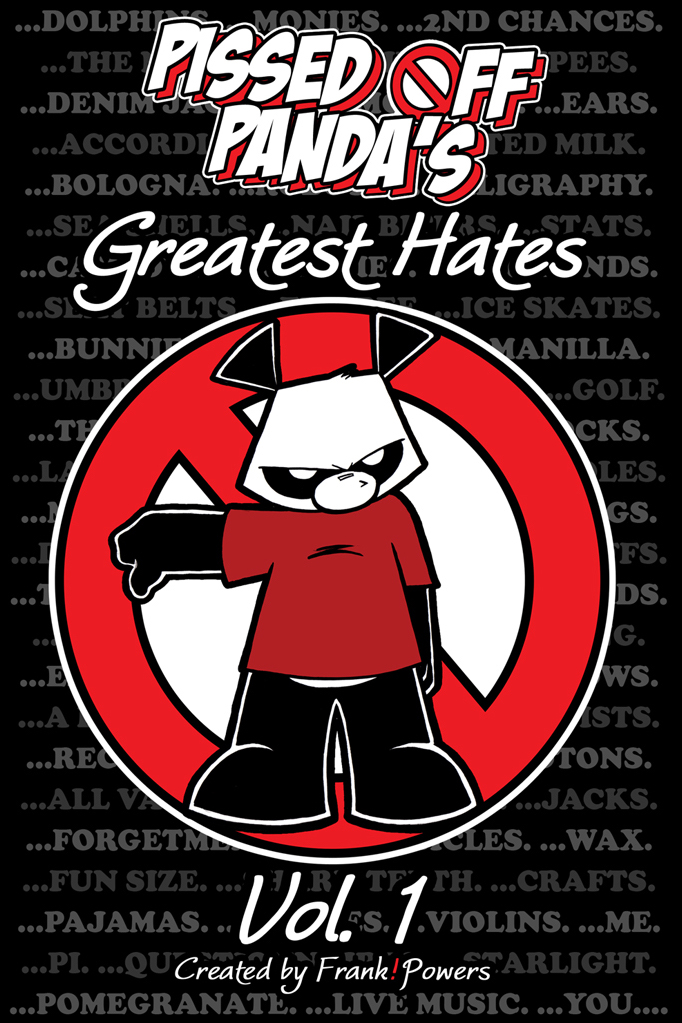 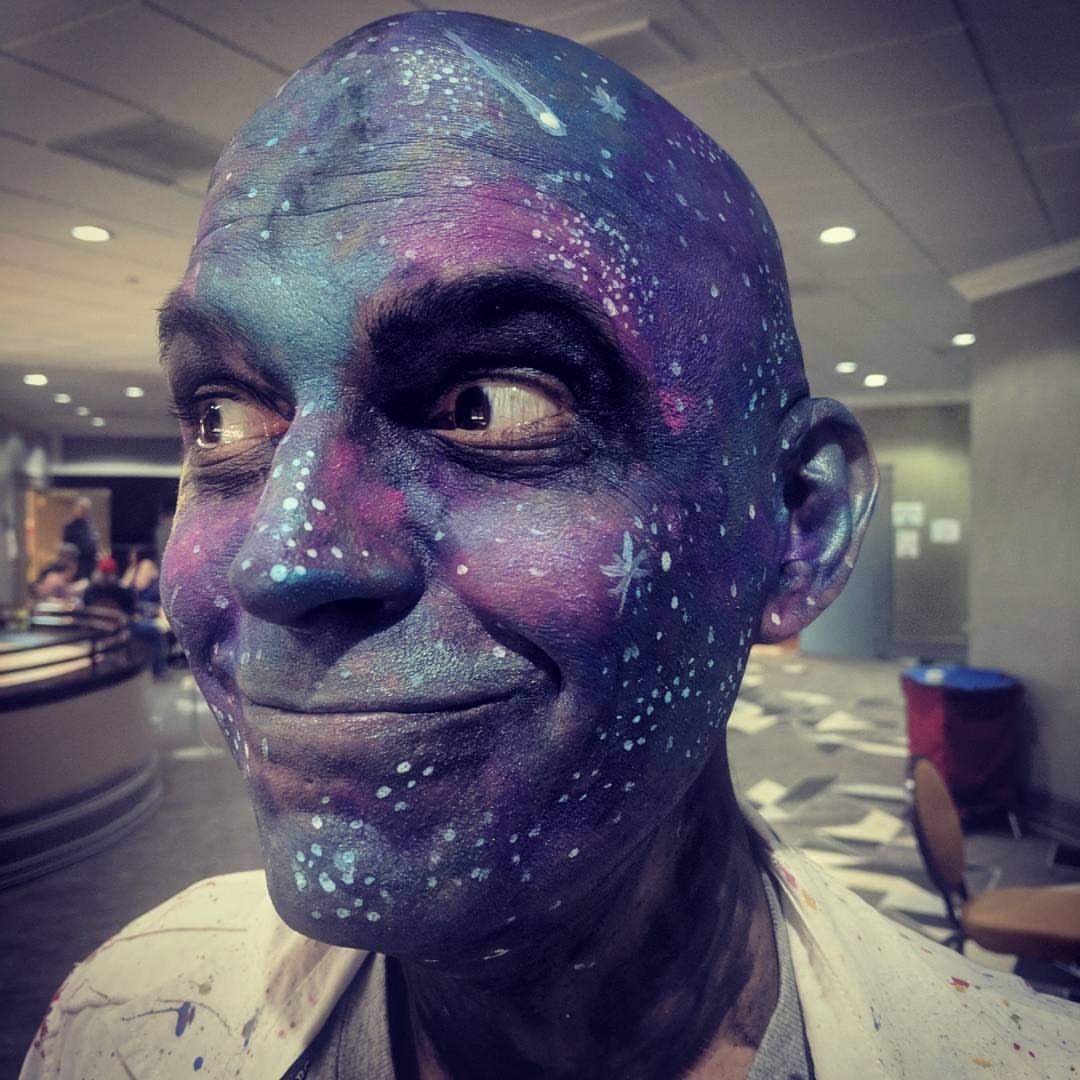 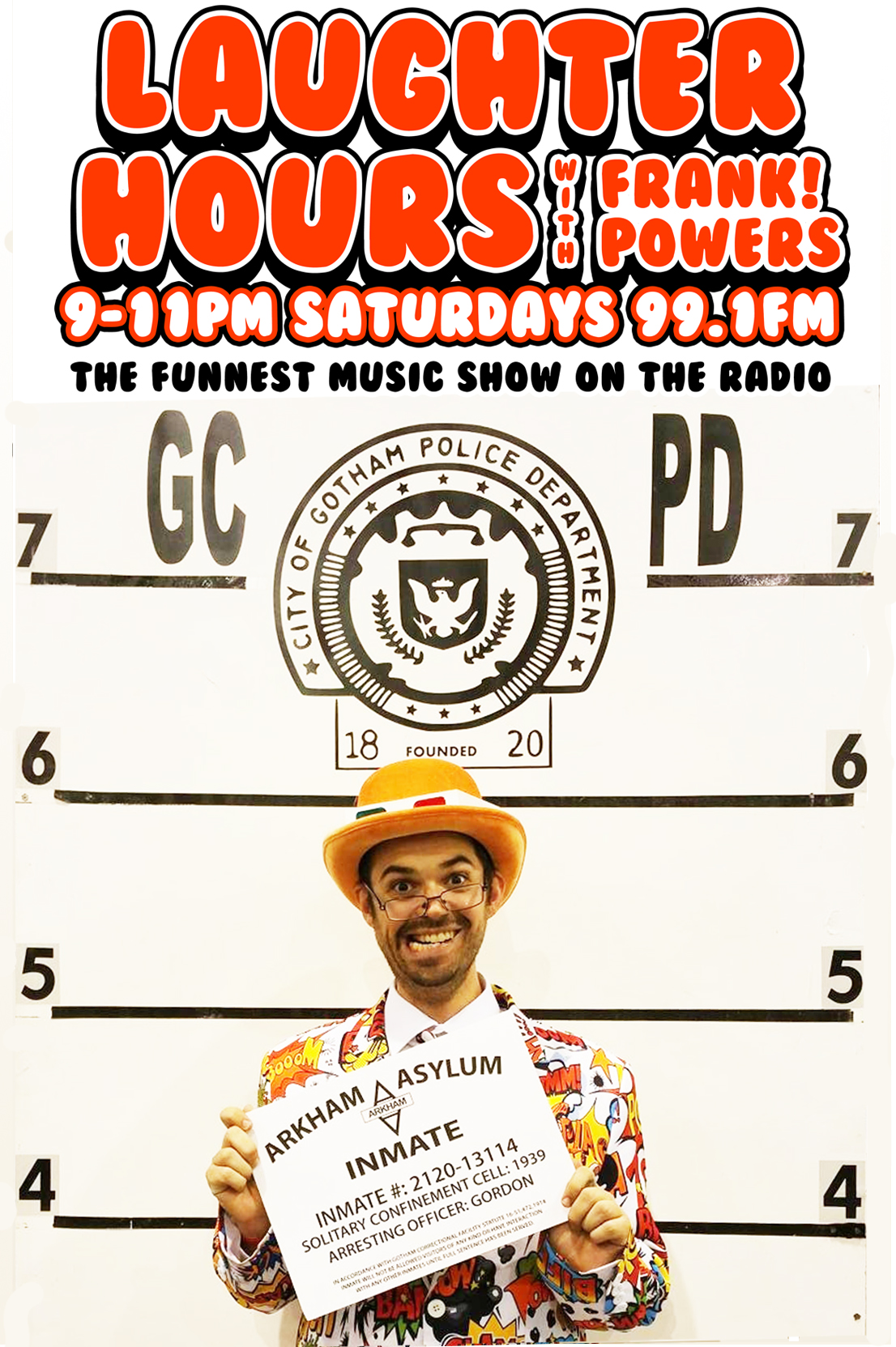